The woman, who wished to remain unidentified, spoke out about the incident hoping to inform other parents about the scene that happened at Reedom Elementary School in Mountain's Edge. 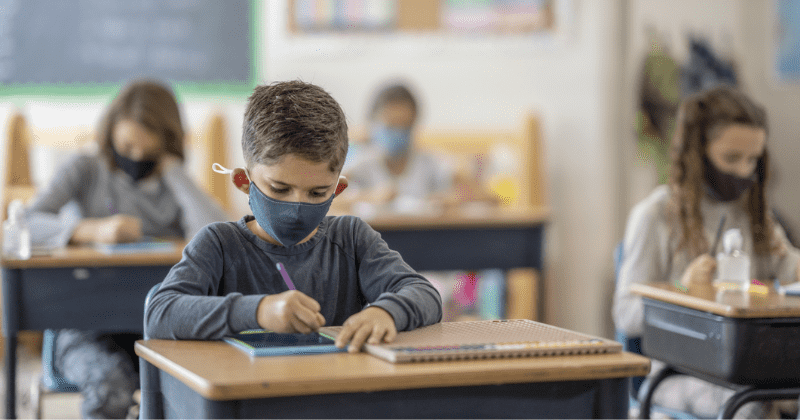 A furious mother in Las Vegas is demanding her son's substitute teacher to be removed from the school after she allegedly taped the fourth grader's face mask to his face. The mother of the 9-year-old claims that the Clark County School District substitute teacher did the same to many of her students in the classroom. The woman, who wished to remain unidentified, spoke out about the incident in the hopes of informing other parents about the scene that went down at Reedom Elementary School in Mountain's Edge. "I was furious, furious. I was scared for my son on what kind of long-term effect it is going to have on him socially, the fact that the entire class was laughing," she told FOX5.

Just in case any1 is wondering what length pro-maskers will go to mask the rest of us.. how about TAPING them to children's faces..

She told the news outlet that her son had gotten up to drink water in between his classes and had forgotten to put his mask back on after. "He went to get a sip of water, forgot to put the mask on. The teacher did not tell him to put it back on or send him to the office, she instead pulled him up in front of the classroom in front of all of the students and she then taped the mask across the top of his face," explained the mother. She noted how the substitute teacher added a second layer of tape from her son's nose to his forehead. Apparently, he had the tape stuck on his face even as he went to the office to collect his homework that he had forgotten at home and his father had dropped off.

Teachers are monsters who love torturing kids. It's always been like this. 1st grade, my teacher kicked a boy until he was on the ground. 2nd grade, teacher made a boy pee his pants, then get a mop from the janitor & clean it up. It's no wonder there are so many messed up people.

"When he went to the office to pick up that homework is when one of the administrators noticed the tape on his face," she added. The concerned administrator then took off the tape from the child's face and alerted the principal, who then went into the classroom to investigate the matter. On arriving at the classroom, "she saw another student who she thought was my son with tape on their face as well," explained the mom. She asked her son if other students in his class were subjected to the same treatment or not and her son answered in the affirmative. Shockingly, this practice had been going on in the substitute teacher's classroom since the beginning of the school year without anyone's knowledge.

Get your kids out of the public schools.
They abuse your kids when they arent teaching them to hate you.
These horror stories happen every day.

"He says that he remembers up to five," added the mom, who pointed out that the incident was not a political matter as she did not have a problem with the mandatory mask-wearing rules. What she was most concerned about was children like her son being punished in such a ruthless way for being forgetful. "He was very upset. He was crying. He was humiliated," she said explaining the impact the incident had on her son. Now the mother wants the teacher to be held accountable for her heartless actions and to never get the opportunity to educate kids. "Its crazy. Corporal punishment in schools should not be happening," she said.

The woman has since filed a police complaint and is looking to change her son's school and move him to a charter school as soon as possible. After becoming aware of the incident, Clark County School District issued a statement that read, "The district is aware of the isolated incident and is dealing with the employee through the proper channels. The principal proactively notified the family of the investigation." That being said, the mom did allege that the incident was not "isolated." More will be known in teh due course of investigation.