trending celebrity people lifestyle news animals
One In Three Brits Only Wash Their Bedsheets Once A Year, Reveals Survey

One In Three Brits Only Wash Their Bedsheets Once A Year, Reveals Survey

We basically live in our beds. It is our office, canteen, and movie theater, which means we need to change sheets once every week. 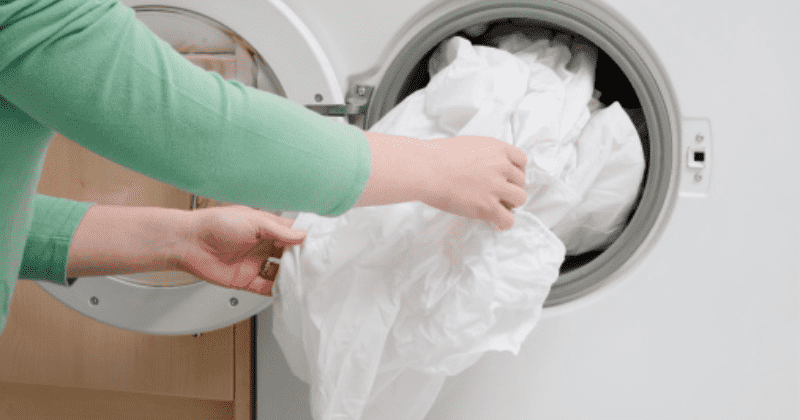 There is nothing cozier than getting under fresh sheets after a long day to fall asleep under the sweet smell of the fabric softener. But after a few days of sleeping on the same sheets, they lose their freshness. It will obviously not have the same type of appeal to sleep in and is probably time you gave it a wash. While you would expect most people to think this is reasonable, washing sheets on the regular is just not something a lot of adults do. A survey that was conducted recently revealed that surprisingly, a lot of people wash their sheets only once a year.

Many people will have weeklong birthday celebrations, even though there is only one day of birth. But the same people will wash their sheets only once. Hammonds Furniture surveyed 2,000 Brits and found that 30% of those asked confessed they wash their bedding once a year or less, according to the Daily Mail. Further, the survey also revealed that 36% of the people only wash blankets once a year. It's not like our beds are used only for sleeping a few hours every day. With the lockdown because of the pandemic, we basically live in our bed. It is our office, canteen, and movie theater.

One in three admit to only washing the sheets once a year or less in new survey https://t.co/B5ftAthd8Z

Having considered the amount of activity that goes on in bed, washing it once a year seems very insufficient. Dr. Aragona Giuseppe, GP and Medical Advisor at Prescription Doctor, told Hull Live that bedsheets need to be changed once every week, ideally. “Washing your clothing items and bedsheets regularly is important for overall cleanliness and ensuring your body remains clean and healthy," the doctor stated. “Bedsheets and pillowcases should be washed as if they are dirty this could promote acne, spots, and other skin issues due to the dirty bacteria on the sheets transferring to your skin.”

The survey also found that 38% of the Brits said they washed their coats once annually as well. Metro UK reported that 18% of the people admitted to washing their jeans the same amount. Winter garments such as scarves, gloves, and hats were also rarely washed. Gloves are basically the easiest way to pick up germs, dirt, and anything on the surfaces that you touch outdoors. As for scarves and hats, it can trap oil and other droplets. Washing these accessories after every use is the need of the hour. Doctor Giuseppe had this to say, "If you do not wash clothing items often you could be at risk of infection or just feeling and smelling unclean."

Kirsty Oakes, Head of Product and Marketing at Hammonds Furniture, stated, “We all have those items on our life laundry to-do lists that we put off, and for some people that can literally be the washing! Especially now that so many of us are working from home and can go for days without seeing people outside our own household, it can be tempting to put the washing off even more." She added, "However, keeping clean is now more important than ever, and that also goes for our clothes, blankets, and bedsheets." Other than actually cleaning your clothes and sheets, it can also improve your mood considerably.

To encourage more cleaning and laundry days, Oakes had this important piece of advice, “If you’ve found yourself washing things less often than is recommended then set aside time each week to do your washing and try to always stick to it. Make the effort to wear clean, fresh clothes each day (even if you are working from home) and just remember how amazing fresh sheets feel when you climb into bed!”