trending celebrity people lifestyle news animals
Swarm Of 20,000 Bees Chase A Car For 2 Days To Rescue Their Queen Trapped In The Back

Swarm Of 20,000 Bees Chase A Car For 2 Days To Rescue Their Queen Trapped In The Back

The owner of the car, Carol Howarth, a 68-year-old grandmother had picked up the queen accidentally when she visited a nature reserve 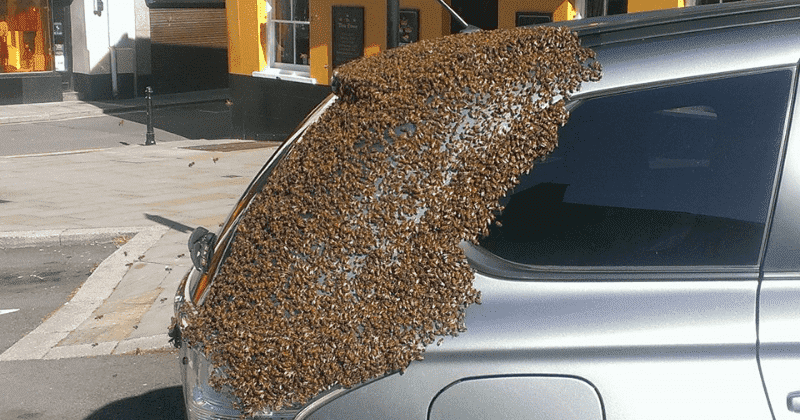 The hard work and loyalty of worker bees are well-known. The hive follows their leader and matriarch, the queen bee who helps keep the cycle of hard work going. The bees are known to stick together, as they help each other out during their short lives to collect, preserve honey, and build a honeycomb. It would be foolish to underestimate the dedication of these tiny insects.

If anything, the bees showed their perseverance when they were determined to rescue their queen, who was trapped in the boot of a car. For over two days, more than 20,000 bees chased a woman's car incessantly to get their queen out of this metal box.

Pictures of this incident that happened in the town of Haverfordwest, West Wales, look terrifying, to say the least as the bees are seen plastered to the back of a Mitsubishi Outlander. The owner of the car, Carol Howarth, a 68-year-old grandmother, was shocked to see thousands of the insects flying behind her car and said she “had never seen anything like it.” What she did not know was that she had accidentally picked up a "tiny winged passenger" when she visited a nature reserve. The queen of the swarm that was chasing her had somehow made her way inside the old woman's car.

CNN reported that when Howarth stopped by a shopping center, the rest of the bees from the queen's hive descended on her car. Unaware of the situation, she kept driving through the town worried about being chased by bees. The local ranger Tom Moses actually witnessed the whole thing and shared it on his Facebook. In the post, headlined "Bee-rilliant swarmathon" he wrote: Driving through town noticed this going on outside the Lower Three Crowns and couldn't resist getting involved! (bees need our help and I worried that some idiot would come to pour boiling water over them or something stupid!).

He then called the Pembrokeshire Beekeepers Association to handle this situation. Roger the beekeeper #1 appeared with a box to put them in and swept some in, then left for a dinner date leaving me backing up Andrew the (rusty) beekeeper #2 (ie watching him and offering encouragement), Moses explained in detail. At first, bees nicely started going into the box. Stung. Then they started to come out again. Hmmmmm. Had a beer. Stung. Andrew doing a great job, bees in. Stung. Then they were coming out again. Wheres the Queen? In the box, or hiding in the crack between boot and car panel? Stung again.

Five beekeepers, park wardens, and passers spent hours trying to get the bees into a cardboard box, reported The Independent. Moses continued: Spoke to Jeremy beekeeper #3 - on Eurostar, but said he'd send help. A drunk bloke from pub went and swept a load of bees off the car with hand looking for the queen, got stung loads pfffft... Beekeeper #4 (man with no name) turned up with a full suit and Smokey thing, stung again, twice - why do they just go for your head? All under control, so buggered off home before stung again. 3 hours well spent, and avoided painting for a bit! The best thing to happen in Haverfordwest for years - should get a load of hives in Castle Square.

Roger Burns, from Pembrokeshire Beekeepers Association, told the Milford Mercury, “We think the queen had been attracted to something in the car, perhaps something sweet, and had got into a gap on the boot’s wiper blade or perhaps the hinge." Burns added, “I have been beekeeping for 30 years and I have never seen a swarm do that. It is natural for them to follow the queen but it is a strange thing to see and quite surprising to have a car followed for two days. It was quite amusing.”