While fans may remember her as a cute toddler who stood out from her family on the hit 2012 show, the former beauty queen reminded everyone that she is no longer the same, little girl from Here Comes Honey Boo Boo. 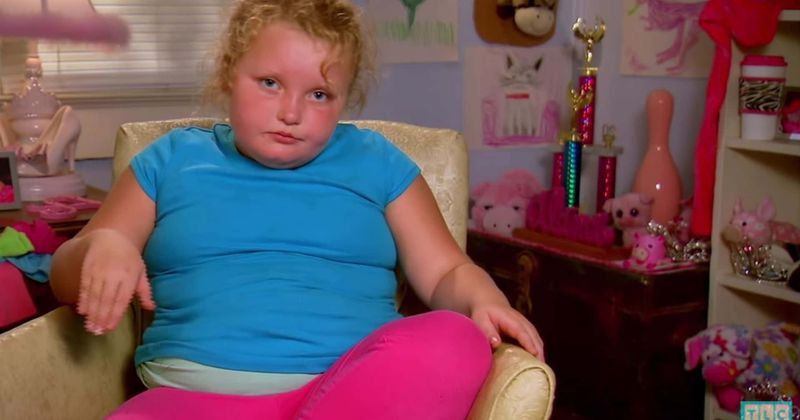 Alana Thompson is back and she no longer goes by her famous nickname "Honey Boo Boo." Thompson rose to fame thanks to TLC's reality television series that followed her life as a young beauty pageant contestant. The former child reality star, who was popular for using phrases like, "A dollar makes me holla," and "You better redneckonize," is now almost 16. A few days before her 16th birthday, Thompson got the opportunity to pose for Teen Vogue and she presented a side of her's that we've not seen before. Styled by Ansley Morgan, the teenager donned everything from sequins and bright red lipstick to shiny metallic tone and cowboy hat, in the digital spread which was tastefully shot by Peyton Fulford.

"OMGG!! I'm soo excited to finally tell everyone that I'm on Teen Vogue," she wrote sharing a picture from her new feature, according to Good Morning America. "This is a dream come true, never in million years would I've thought I was gonna be on Teen Vogue but look at me now! I'm so thankful & grateful for this opportunity." But the shoot was not the only thing that Thompson was candid about. She also opened up to the publication regarding a lot of things, including what it was like growing up in the spotlight and her thoughts about her mother, who is popularly known as "Mama June."

Before delving into the specifics of her life, Thompson set the record straight saying she would prefer being called by her real name. "My mama did not name me Honey Boo Boo. My name is Alana," said the 15-year-old. She then went on to talk about her mom and shared how forgiveness was a part of their efforts to mend their relationship. As for the other half, it was her mom's admission to her wrongful actions relating to substance abuse. "A lot of folks in this world do not realize how many people are actually really affected by drug and alcohol [use]...It's very, very hard," she shared. "It's something I'd wish on nobody, for real."

Unlike most, Thompson had a very different introduction to life. At the age when kids only focus on playing and completing their homework, this 15-year-old was placed in front of cameras that captured her and her family's day-to-day life. Having one's life broadcasted to the world is not something that most people are comfortable with, but the star of this show had not even reached the age where she could fathom its implications. Coupled with the fame, the young girl also had to deal with her mother's drug abuse problem.

"When my mama got real bad with her [drug use], I didn't know where I was going to end up. I'm proud of myself for how far I've come," she explained. While fans may remember her as a cute toddler who stood out from her family on the hit 2012 show, the former beauty queen reminded everyone that she is no longer the same, little girl from Here Comes Honey Boo Boo. "I guess people still expect me to be little Honey Boo Boo and I'm not anymore," she shared. "Just because I'm from the south, people expect me to be all country bumpkin, out riding four-wheelers all the time, but that's not really how it is...But I do not care. As long as I like myself, I'm good."