The school took two photos: one with 14-year-old Morgyn Arnold and one without. 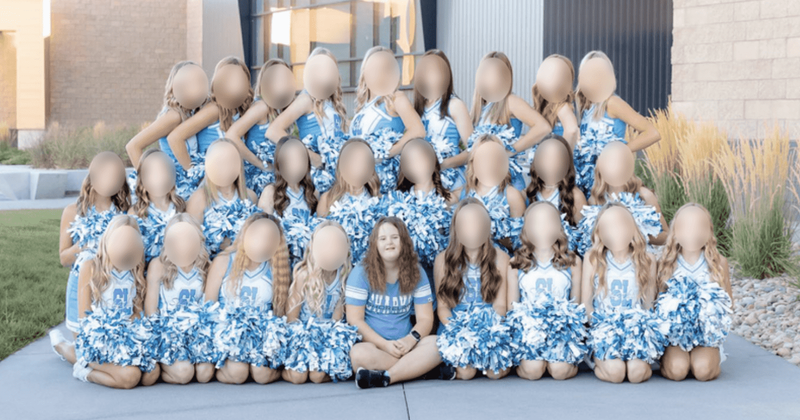 Eighth-grader Morgyn Arnold was left devastated and confused on the last day of school when she found out that she had been left out of the Shoreline Junior High school cheerleading team's yearbook photos despite very much being a part of the team. The 14-year-old was described by her sister Jordyn Poll, 25, as spunky, caring, and beautiful. "Morgyn is the sweetest," Poll told TODAY. "She is so kind and so forgiving and pure as they come. Think back to your school days — yearbook day was so fun and exciting. Morgyn was so excited to go to school and get her yearbook." But Morgyn and her family were shocked to learn that the teen had been cut out from the photo. The family wanted to know why Morgyn had been left out.

So @shorelinejrhigh has a young woman with Down syndrome on the cheer squad. They took a team photo with her in it. Sent her away. Then took another photo to use for their publicity.

Sadly, the school yearbook has frequently been a vehicle for #exclusion. Altered photos. Erasing freedom of expression. It's another form of bullying that cannot be undone. https://t.co/iy7IfODZba

In a Facebook post, Poll shared two photos of the Shoreline Junior High cheerleading team — one including Morgyn and one without — alongside a lengthy caption detailing the family's hurt. "The first picture you see is a cute junior high cheer team. The second, although similar, includes all members of the team. It’s the SAME cheer team–SAME girls, SAME photo shoot, SAME poses, but one included all team members and one did not. Unfortunately, the first one was posted on the school’s social accounts and in the school yearbook. Additionally, Morgyn’s name wasn’t even mentioned as a part of the team. She wasn’t included. She spent hours learning dances, showing up to games, and cheering on her school and friends but was left out."

A Utah teen with Down syndrome was left out of her cheer team's yearbook photo.

Poll who continued to stand up for her sister spoke about how such a gesture can be insensitive, sharing: I hope that no one ever has to experience the heartbreak that comes when the person they love comes home from school devastated and shows them that they're not in the picture with their team. I hope that no one ever has to explain why people deliberately choose to be exclusive. There were two photos: one with Morgyn and one without. A choice was made on which photo to submit, a choice made MULTIPLE times, and a choice that excluded Morgyn EVERY. SINGLE. TIME. This is the second time in three years that sweet Morgyn has been left out of the yearbook. Two years ago they didn't even include her in the class list.

"When a child with disabilities is kept out of an activity, not only will it hurt them (and their families), but the typical children internalize this segregation as necessary. They will carry that lesson forward."

So that's what you're teaching.

The post (which has now been removed or made private) received a lot of reactions, with many people blaming the school's insensitivity.  As a result, Shoreline Junior High issued a statement calling the photo selection a mistake. "We are deeply saddened by the mistake that was made," the school said in the statement. "We are continuing to look at what has occurred and why it occurred. Apologies have been made to the family and we sincerely apologize to others impacted by this error. We will continue to address it with the parents of the student. We will continue to look at our processes to ensure this does not happen again." Additionally, Shoreline Junior High School and the cheerleading squad have since suspended all their social accounts.

How can it be a mistake? The choice was made to remove her and take the pic again. That is a choice. That 2 pics exist in the first place makes it a choice.

Jordyn Poll told NBC News that the family does not believe that the intention behind cropping Morgyn out was based on malice but hopes that everyone can move forward in the right direction. As for the young teen, she is dealing with the ordeal with grace. "Morgyn could have chosen to be angry or upset, but instead she chose to be understanding, and forgiving," Poll said. "Those girls on the team are her friends, and they've been incredibly supportive through all of this." Morgyn and her family will meet with school administrators to talk about the issue and figure out how to advocate for students with disabilities, Poll said. "I think the important thing here is that we focus more on loving one another and being more inclusive," she said. "We can all learn from Morgyn in how she handled this with such a positive attitude. ... We cannot continue to shame one another when mistakes are made. There is no place for shame in all of this."