The Barcelona Opera House Re-opened With A Moving Performance To 2,292 Plants. Yes, Plants 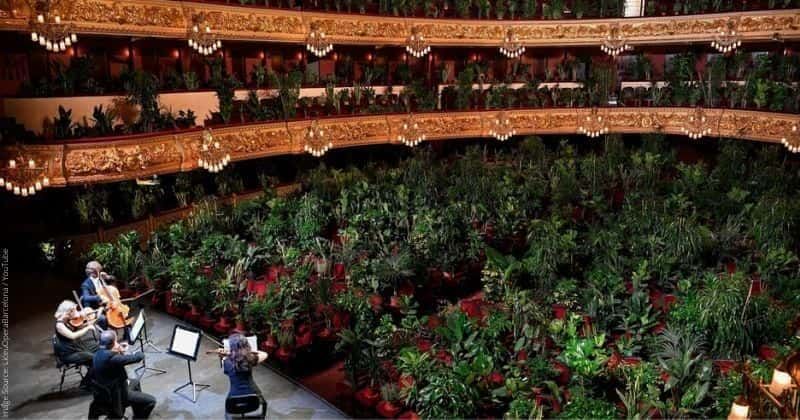 The coronavirus outbreak brought the whole world to a standstill. Going to the grocery store was a challenge in itself, let alone going to large gatherings where it would have been impossible to maintain a six-feet distance with others. This included going to the movies, sports, theatre, special occasions like weddings and such. After nearly six months of staying at home, places have started to re-open slowly but steadily. Sports has been taking place in empty stadiums with fans cheering from their homes while some stadiums are letting teddy bears fill the seats.  Similarly, the Barcelona Opera also re-opened earlier this week to a unique audience.

Barcelona's Gran Teatre del Liceu opera house was promptly shut down at the onset of the pandemic and re-opened its doors only this week. The opera has a seating capacity of 2,292 seats which were filled with a diligent audience of plants. It's common for performances at the Liceu opera to be sold out. But for the first time, the musicians played to an unusual audience of thousands of plants, reports CNN. This totally original and unique concert was the idea of conceptual artist Eugenio Ampudia. The concert did have a human audience since the performance was also live-streamed online.

The UceLi Quartet string quartet performed Puccini’s "Crisantemi" for the plants that were brought in from local nurseries. "After a strange, painful period, the creator, the Liceu’s artistic director, and the curator Blanca de la Torre offer us a different perspective for our return to activity, a perspective that brings us closer to something as essential as our relationship with nature," a press release from the opera house stated. The plants will be donated by Ampudia to 2,292 frontline healthcare professionals who have been spearheading the fight against the deadly virus. It will be donated with a certificate in recognition of their work during these tough unprecedented times.

The concert is an initiative from the Liceu, the artist Eugenio Ampudia, and Max Estrella gallery. The Liceu is one of the largest and most important opera halls in the world. "It welcomes and leads a highly symbolic act that defends the value of art, music, and nature as a letter of introduction to our return to activity.  This dialogue between the Teatre and the visual arts gives continuity to the artistic Liceu de Les Arts project being implemented by Víctor Garcia de Gomar," the statement read. This performance will also be the prelude to the 2020/21 the opera's season "full of synergies and encounters between artistic disciplines."

Spain was one of the hardest-hit countries when the virus first started to spread. The country had gone into lockdown after it had become a virus hotspot and a national emergency was declared. The lockdown that lasted for three months has been easing now. The country is set to re-open in stages. There are four stages announced which included Step  Zero which was the stage for preparation. According to the country's re-opening plan, establishments such as theaters and cinemas can operate with capacity restrictions or in this case, plants. The venue's statement addressed this gradual return to a new normal as well, according to NPR.

A new coronavirus outbreak in Spain’s northeastern region of Aragón has forced regional authorities to take a new step back in the deescalation process. The neighboring province of Lleida is trying to prevent the flare-up from extending into its territory. https://t.co/yPeMKsIT53

Unfortunately, as Spain is going through the "new normal" the Health Ministry confirmed 248 new COVID-19 infections, reports Anadolu Agency. "If the situation becomes serious, we will declare the state of emergency again, either nationwide or in part of the territory,” Spain’s Deputy Prime Minister Carmen Calvo said in an interview with Spanish broadcaster Antena 3. She said that the new cases were expected as part of the new normal. "There is no doubt that we would be forceful in our response again. That is what saved us," she added.