The Queen cut a solitary figure when she attended her husband Prince Philip's funeral at Windsor Castle. 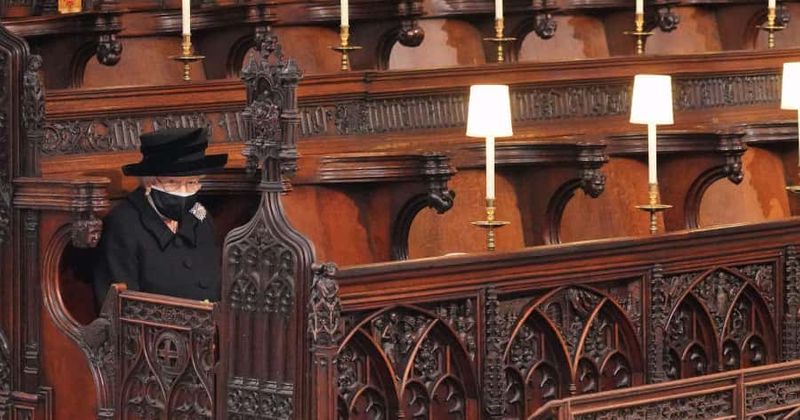 Queen Elizabeth could be seen wiping away tears as she mourned her husband alone during his funeral in St. George's Chapel at Windsor Castle. The Queen bid goodbye to her "strength" Prince Philip with whom she spent 73 years happily wedded years of her life. Grief-stricken, the Queen bowed down her head in tribute while accompanying her beloved partner's coffin on its ultimate journey. Also seen in the frame was her eldest son Prince Charles who cried as he followed the procession into church alongside other family members, Daily Mail reports.

The Duke of Edinburgh's coffin was covered in his personal standard and carried his sword, naval cap, and a wreath of flowers. Upon closer inspection, one could also spot a handwritten note from the Queen, as pallbearers placed the casket onto the green Land Rover Defender hearse, partly designed by the Prince himself in the castle's yard which had hundreds of armed personnel gathered to give the former veteran a glorious farewell. Following the eight-minute procession and the 50-minute service, Philip's coffin was lowered into the Royal Vault as a lone piper of the Royal Regiment of Scotland played a lament and the last post was sounded by buglers from his beloved Royal Marines, who went on to play Action Stations as per the willed request of The Duke of Edinburgh.

Due to the Covid-19 restrictions, the depleted 30-strong royal mourners then attended the service in person and made their way out of the Church after the Archbishop of Canterbury, Justin Welby pronounced his Blessing. The group then headed in the direction of the castle with Prince Harry choosing to walk with brother William and sister-in-law Kate Middleton as the trio exchanged smiles and conversation after reuniting for the first time in over a year riddled with royal controversies. This saw Harry choosing to abdicate his royal duties to move to California with his wife Meghan Markle and son Archie.

Back at the funeral, the Queen had arrived as the national anthem bellowed and the royal Bentley stopped next to her husband's coffin, where she took a brief pause as the cannons fired and the bells echoed in honor of the late Duke. She could even be seen wiping away tears from her eyes. Then the Queen was driven to St George's Chapel with her lady-in-waiting as a company.

Later, she sat alone at the front of the church, bowing her head in respect during the national minute's silence. Her children and grandchildren, in attendance, meanwhile were on the verge of tears. Prince Philip passed away peacefully on April 9, having served as the Queen's consort for 73 years. The former oldest member of the Royal Family was only two months shy of turning 100 years of age, but his lifelong service of the country and his active participation in shaping the country's many policies are set to be cherished for years to come.

The Duke of Edinburgh has been laid to rest in the grounds of Windsor Castle as a temporary arrangement with plans to move his casket to where the Queen will be buried when she dies. Prince Philip's resting place is also shared by King George III, who died in 1820, King George IV and King William IV. Eventually, when the Queen passes away, he will be moved to the gothic church’s King George VI memorial chapel, the resting place of Queen Elizabeth's parents, George VI and Elizabeth.