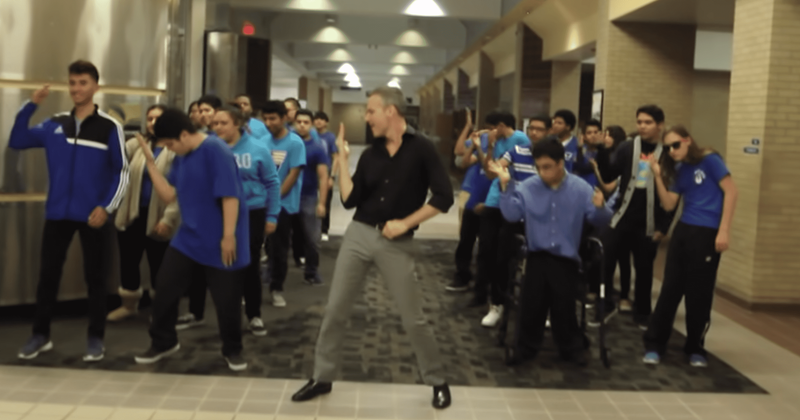 Remember the good old days when we could go to school to hang out with our friends and spend time with the cool teacher dancing around the school? Those were the days! It has been almost a year since we have been able to properly enjoy each other's company let alone orchestrate an elaborate choreography to include hundreds of people coming together to dance in unison. Without masks and in close quarters. While we wait for those carefree days to come back, we can live vicariously through the students of A. Maceo Smith New Tech High School in Dallas who had the time of their lives a few years ago.

The students of this Dallas school were led by their theater director Scot Pankey who carried out a fun choreography to the tune of Bruno Mars' chart-topping song, "Uptown Funk." A video of this delightful dance was shot and shared on YouTube and went viral. Even Mars watched it and was floored. The video starts with Pankey sitting in his office looking bored until the music starts playing. He then dances out of the room to be joined by two of his students in matching red shimmery tops. They groove to the tune for a while only for their teacher to race across to another group of students.

Through the course of the song, Pankey takes us throughout the school and is joined by six of his classes, whom he ensured to get involved in the project. Speaking to Dallas News, Pankey said, "I heard the song before Christmas and fell in love with it. We are a project-based school — there are only two in the Metroplex — and that means you give the students a project, put them in teams, and they have to come up with solutions. They had three weeks to work on it, then present as a group what they learned." They happened to rehearse for about two weeks before the one-shot video was finally made.

@eonline @TheEllenShow needs to see this. Teacher stepping out of his comfort zone. Love it.

The first project of the year was a smash hit. Pankey encouraged his students to put their best foot forward and it really did pay off. "I told them, 'I am not a dancer, but I’d love to do this and go on this journey with you, and we can all learn from it and have a good time,'" the inspiring teacher stated. "And they were all on board." It was such a hit that even Bruno Mars approved. He shared the video on his official page and wrote: "I cried at the end. I'm still a thug though. Thank you to everyone involved in making this video." The caption of the video read: This is a great example of how a bunch of technology students let go of their fears, trusted their teacher and got down to Uptown Funk!!!

https://t.co/75at0XmgW2 I cried at the end. Im still a thug though. Thank you to everyone involved in making this video.

The video was shot by students from the school. Bryan Urraca who was the student council veep and Johan Cruz senior class president shot the video. It was edited by Jonathan Vega and done in a single take which makes it so much cooler than it already was. The students of A. Maceo Smith New Tech easily gave Glee a run for its money with the video. "We had a great time," Pankey said. "I am overwhelmed by the response. I am honored. It’s all been very positive." You can watch the video here:

The following year, Pankey gathered more of his students and produced another amazing video this time with Andy Grammer's "Good Day to be Alive." This time they took it to the next level and made it even more elaborate. In the caption, Pankey wrote: I asked my kids at A. Maceo Smith New Tech High School to think outside the box and find a way to Uplift, Motivate, and Encourage others. This is what they came up with. Enjoy! You can watch the follow-up video here: