Cat Sims gifted a bottle of wine which had a label with an ultrasound of her baby and read: Drink this for me, You're a grandpa to be 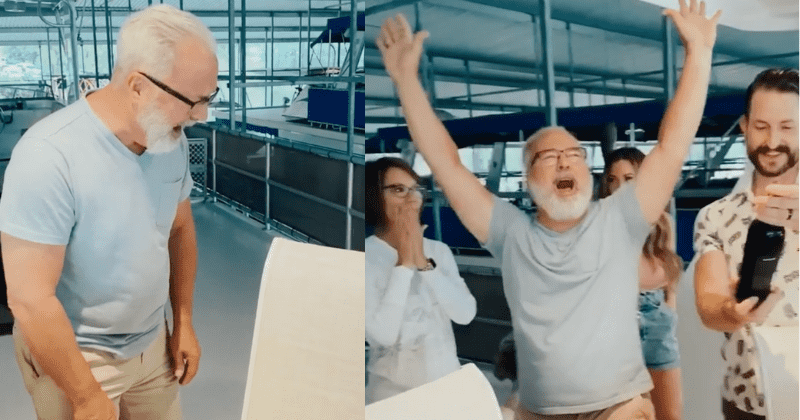 There is nothing more exciting for parents to see than their kids all grown up and successful. They want their children to find a good job, earn a good living, find their significant other, and start a family of their own. In the process of children starting their own family, they get the opportunity to take on a new role. The pure joy of hearing that they are now grandparents is something that is heart-warming to watch. One pregnant mother shared the reaction her dad and mom had on hearing news of them becoming grandparents. It may just be the most adorable thing you see today.

Cat Sims, on Instagram, shared a video of surprising her parents with the news that they were soon going to be grandparents. However, she did it in a totally unique way under the guise of gifting a wine bottle to her father, which actually had a label with an ultrasound of her baby. In the video, she tells her parents, "This is very fancy [wine.] So don't chug it." Her dad expresses disappointment that she revealed what the gift was and his daughter quickly apologizes and adds reassuringly, "At least you don't know what kind of wine it is." But he has no idea what he's in for. He unwraps the bottle, reads the label, and realizes that the label actually reads: "Drink this for me, You're a grandpa to be."

In the caption, Sims wrote, World’s cutest reaction to pregnancy reveal and added, Watch my adorable Daddy lose his mind over finding out I’m pregnant. The pure joy that we all need to see right now! And indeed it was. After ushering his wife over to share the good news, he immediately starts crying. He is overwhelmed with the good news and after hugging his daughter and son-in-law even does a little jig, unable to contain his delight. His wife joins him in literally jumping around with joy as the small family gathering celebrate a new member to come.

In a follow-up video, Sims also revealed the gender of the baby to her parents by making them cut a cake. The two excited grandparents-to-be impatiently cut the cake that had blue frosting to reveal the inside, which was filled with pink cream, signifying that they would be grandparents to a baby girl. The two of them, who still seemed to be young at heart, started to jump up and down with joy. It just goes to show that they would make wonderful and loving grandparents to the baby girl who is on her way. No doubt they will also participate actively in the baby's upbringing as well.

The involvement of such eager and excited grandparents could do wonders for the baby as she makes her way into the world. According to research, a child who has a strong relationship and involved grandparents will be happier and more secure as they venture into adulthood. It is a win-win situation for the grandparents as well as grandchildren to have each other in their lives. Other than the parents saving a ton on babysitting, there are benefits to go all around. For instance, the kids stand to learn a lot from their experienced grandparents while also catching them up to the current generation and teach them new things in turn.

Hanging out with their grandparents can make kids feel more secure as well. They will learn to lean on their grandparents for social security in addition to their parents. Conversely, grandparents tend to live longer when they spend time with the young ones. It keeps them active and relieves stress, acts as their anti-aging remedy. It helps reduce, if not, close the generation gap and also makes children less ageist. “It’s also nice to have the support of your own parent when you’re raising your child,” Kimberly Agresta, a licensed clinical social worker and the co-founder of Englewood’s Agresta shared.