Toddler Is Hospitalized After Swallowing A Battery, Mom Asks Parents To Be More Attentive

After her son had become lethargic, Ta'Sha Garrett took him to the hospital where the doctors found a button battery that had started burning his esophagus 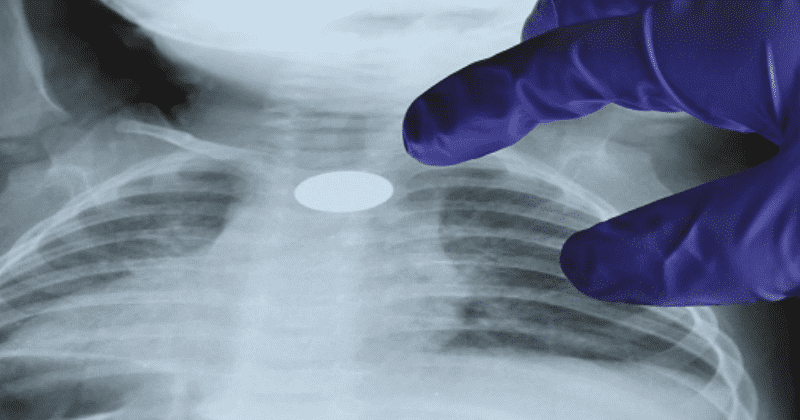 One mother from Indiana wants every parent to know the potential risk of button batteries lying around the house. After her toddler ingested a battery with near-fatal consequences, Ta'Sha Garrett wants parents to be more careful with their own children. Garrett noticed that her previously healthy 16-month-old son, Mahziere, was acting strange about two weeks ago. “He was laying on his back, slobber coming out his mouth and real lethargic,” Garrett told WTHR. She rushed him to the hospital, where doctors first suspected the boy could have a COVID-19 infection. Then they took an X-ray and discovered the battery.

A mother whose toddler accidentally ingested a button battery is speaking out in hopes to warn parents of this potential risk that could exist inside the home. https://t.co/e9HAxiSSKw

Button batteries are tiny, shiny, coin-shaped batteries used to power devices like watches, toys, remote controls, and hearing aids. It is a hazard when it comes to babies because it is small and can easily be put in their mouths, ears, or noses. According to Kids Health, "A button battery put in a child's mouth can get stuck in the windpipe and block breathing. Chemicals in the batteries can cause serious burns when swallowed or stuck in the body. A swallowed button battery or one that's stuck in the nose or ear can cause a very serious injury."

Indeed, doctors found a button battery that Mahziere had swallowed which had started burning his esophagus. "He brought me the battery and I broke down," Garrett told Good Morning America when the surgeon who removed the battery showed it to her. "I knew the severity of swallowing batteries. I didn't think that would happen to us. I'm really careful when it comes to things like that." The battery had to be surgically removed by the doctors. The removal was carried out in late September at IU Health Riley Hospital for Children in Indianapolis. Doctors said that Mahziere had likely swallowed it two weeks prior.

Mom warns parents after her toddler is hospitalized for swallowing a battery https://t.co/Fzup1PD04X

Recalling those two weeks, Garrett said that her son had been eating well, sleeping, playing, laughing until one day she noticed his breathing was off. "That day I had picked his brother up from school and he was really lethargic," she explained. "Everything about him was moving slow. He ended up sleeping on the car ride home." Later that day, she heard Mahziere whimpering in the other room and foaming at his mouth. "Up until then, I was pretty optimistic it wasn't a battery," Garrett said. "I don't have watches around the house." He may have found one at a relative's house.

After the tragic death of a toddler who swallowed a button battery this week, we're sharing this as a reminder to parents of the dangers batteries can pose.

This is the damage they can do to your insides if ingested → https://t.co/NTZ58nc76w

Thankfully, Mahziere will be making a full recovery even though he had to spend two weeks in the hospital to recover. Dr. Fred Rescorla, a pediatric surgeon at IU Health Riley Hospital for Children, said, "The battery becomes stuck in the upper part of the chest and it discharges, and unfortunately it discharged very quickly and burned the esophagus completely." The doctor also noted that they see 10 to 15 cases a year where a child swallows a button battery. “It was definitely scary. And a lot of people do not know the precautions and think it’s going to be OK, but a lot of times it can’t be and might not be so lucky to have a full recovery,” Garrett said of the mishap.

Her message to other parents is to be attentive to their kids and she said, "They move really fast. Even if you think you're watching them, you have to be mindful that kids move quicker than you. If a lot of times people are watching your kids or your kids are going places, warn others what your child is capable of and getting into. Let them know your child is Curious George." Kids Health advises parents to call emergency services right away and possibly give the child honey on the way to the ER, provided the battery was likely swallowed in the last 12 hours, and the child is not allergic to honey. It would be best to get medical help as soon as possible.