Eric Trump claimed the pandemic was a hoax that would magicaly disappear after election day in November. 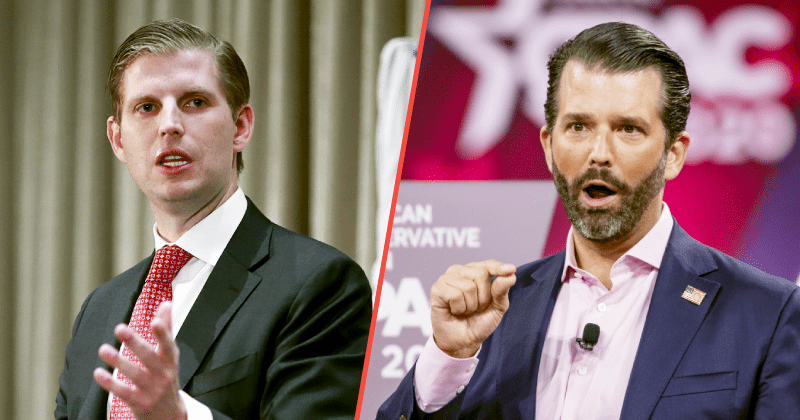 Donald Trump Jr and Eric Trump are being slammed after making below the belt attacks on Joe Biden and the Democrats. The President's sons' pushed wild conspiracy theories, calling Biden a pedophile and even claiming the Coronavirus pandemic was a Democratic hoax to ensure Donald Trump isn't re-elected in November. The baseless jibes were considered crass even by Republican standards. They've certainly learned from their father, who once claimed that fellow Republican Ted Cruz had helped kill JFK. Don Jr. and Eric Trump have ramped up the attack on Biden to deflect from their father's horrendous response to the Coronavirus pandemic.

The @nytimes is right. There’s NOTHING CREEPY at all about how @JoeBiden interacts with the kids in this 4+ min long video.

All the touching & hair sniffing is TOTALLY APPROPRIATE & 100% NORMAL. Everyone does it!

I'm a bad person for mocking him & thinking it's disgusting!!!🙄 pic.twitter.com/DgQOnaK8q6

Donald Trump Jr. posted video of the former Vice President interacting with kids during congressional swearing-in ceremonies and accused Biden of "unwanted touching." Donald Trump's eldest son faced severe criticism for promoting slander on his Instagram account. Don Jr. dismissed the criticism, claiming "joking around." In fairness to Donald Trump Jr., the pictures and even the video of Trump greeting kids and smelling their hair is incredibly creepy. Biden's campaign released a statement slamming Trump's children and called it just another attempt to deflect from the government's handling of the crisis. “No repulsive, manipulative tactic will change the subject from how almost 90,000 Americans have paid for Donald Trump’s coronavirus negligence with their lives and how the booming economy he inherited from the Obama-Biden administration is now suffering from depression-level job losses,” said Biden’s spokesman, Andrew Bates, reported The Guardian.

It's pretty rich of Trump's children to target Biden on sexual assault when their father himself has been accused of sexual misconduct by 43 women including raping a 13-year-old girl. In 2016, five contestants who participated in the 1997 Miss Teen USA pageant accused Trump of barging into dressing rooms while they were changing. They said he made no attempt to leave.

"Donald Trump specifically asked about me because I remind him of his daughter, and she said, 'Well, she's 13 as well.'"

I *know* we avoid seriously discussing this because it is disturbing beyond comprehension. But we all know what Trump has said about Ivanka.

Biden has been accused of inappropriate behavior by multiple and digitally raping an old staffer, Tara Reade, during his time as Senator. Reade said the then-senator pressed her up against a wall and digitally penetrated her without consent. “It happened all at once, and then… his hands were on me and underneath my clothes,” said Reade. She recalled him asking, “do you want to go somewhere else?” She pushed him away and Biden told her, "Come on, man, I heard you liked me.” Biden was also accused by Lucy Flores, a former Nevada state assemblywoman, of touching her inappropriately and kissing her on the head during a Democratic campaign rally in 2014.

Eric Trump on his dad being unable to hold rallies b/c of a pandemic that has killed nearly 90k Americans: "After Nov. 3, coronavirus will magically all of the sudden go away & disappear & everybody will be able to reopen. [Dems] are trying to deprive him of his greatest asset." pic.twitter.com/9ZGQw9H3JC

On the other hand, Eric Trump called the pandemic a hoax orchestrated to stop Trump from getting re-elected in November. The President's son believes it's all a hoax planned by the Democrats to stop Trump's supporters from gathering at his campaign events. “They think they’re taking away Donald Trump’s greatest tool, which is to go into an arena and fill it with 50,000 people every time. You watch,” Eric told Jeanine Pirro on Fox News. “They will milk it every single day between now and November 3rd.” He went on to claim that Democratic presidential candidate Joe Biden loves this.“And guess what — after November 3rd, coronavirus will magically, all of the sudden, go away and disappear and everybody will be able to reopen.” He described it as a “very cognizant strategy.” Eric Trump was only echoing his father's claims that the Coronavirus was a hoax. "This is their new hoax,” said Donald Trump, in March.

Biden's campaign also hit out at Eric Trump for suggesting the pandemic was a political ploy by the Democrats. “We’re in the middle of the biggest public health emergency in a century, with almost 90,000 Americans dead, 1.5 million infected and 36 million workers newly jobless. So for Eric Trump to claim that the coronavirus is a political hoax that will ‘magically’ disappear is absolutely stunning and unbelievably reckless,” said Biden's communications director, Kate Bedingfield. With the elections looking large, the Trump campaign and the right-wing eco-system of hate appear to be targeting Biden much like the way it did Hillary Clinton, Trump’s opponent in 2016.