trending celebrity people lifestyle news animals
A Two-Day-Old Baby Dies Of Coronavirus, Got It From Mother Who Tested Positive

A Two-Day-Old Baby Dies Of Coronavirus, Got It From Mother Who Tested Positive

The baby was born premature and had be to be put on ventilator support immediately after birth, in South Africa. 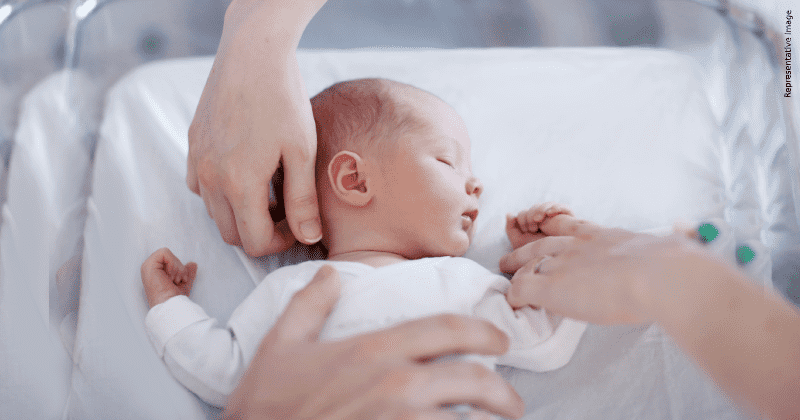 A two-day-old baby passed away due to a Coronavirus-related illness in South Africa, the government announced on Thursday. The baby was born with breathing difficulties after contracting the virus from the mother who had tested positive for the virus. The born was also born pre-term which complicated matters and the baby had to be put on a ventilator, according to a statement by the South African health ministry. "The mother had tested positive for COVID-19, and the child subsequently tested positive for COVID-19 as well. It is important to appreciate the complexities of the underlying condition of prematurity," read the statement issued by the government, reported CNN. Health Minister Zweli Mkhize said the baby was born with lung difficulties. Mkhize said the baby required ventilation support immediately after birth and eventually died on Wednesday.

Zweli Mkhize confirmed that it was the country's first neonatal death. "We extend a special word of comfort to the mother of this child and salute the neonatologists, nurses, and all allied and technical personnel who had the difficult task of caring for the neonate to the end," said Health Minister Zweli Mkhize. South Africa has recorded more than 19,000 deaths and a total of 369 deaths. Africa has been largely successful in containing the virus but South Africa hasn't struggled with the pandemic with the country recording the highest confirmed Coronavirus cases on the continent. The country announced strict restrictions on account fo the pandemic to limit the spread of the virus. The five-week lockdown announced by the government ended on April 30.

With the country re-opening the economy, South Africa's President Cyril Ramaphosa said the nation has adopted a five-level alert system to tackle the challenge of the pandemic to help ease the country back to normal life. South Africa is allowing certain sectors to function at the moment with the rest of the industries expected to open in phases after taking into account the country's progress. Schools in South Africa are expected to reopen on June 1, with the education department drawing up the guidelines that educational institutions will need to follow.

South Africa also registered the death of a healthcare worker in the Western Cape. Zweli Mkhize also paid tribute to the healthcare workers for putting their lives on the line during the pandemic. "When Coronavirus claims the lives of the very people who are the bedrock of the national response, we feel the loss in so many ways," said the health minister. "I want to send a special tribute to the healthcare workers who continue to serve with honor and compassion, despite the real risks they face in the frontline. My heart goes out to the family, colleagues, and loved ones of this compatriot. We salute her for the contribution she has made to the fight against Coronavirus," said Mkhize.

Childbirth has also become complicated because of the pandemic. Apart from the lack of hospital resources and safety equipment during the health crisis, expectant mothers are also facing issues. A 27-year-old-woman gave birth while in a coma under rare circumstances in Vancouver, Washington. Angela Primachenko, a respiratory therapist, contracted Coronavirus when she was 33 weeks pregnant. As Primachenko's condition worsened, doctors decided that the best option would be to put her into a medically induced coma. Days later, Primachenko gave birth to a daughter while in a state of coma. The doctors had the baby tested for Coronavirus and the tests came back negative. “I feel like I’m a miracle walking,” said Primachenko, after the ordeal.