Hanna and Heather Born were babies at the time of the attack and were so inspired by the actions of those around them that they decided to serve their country. 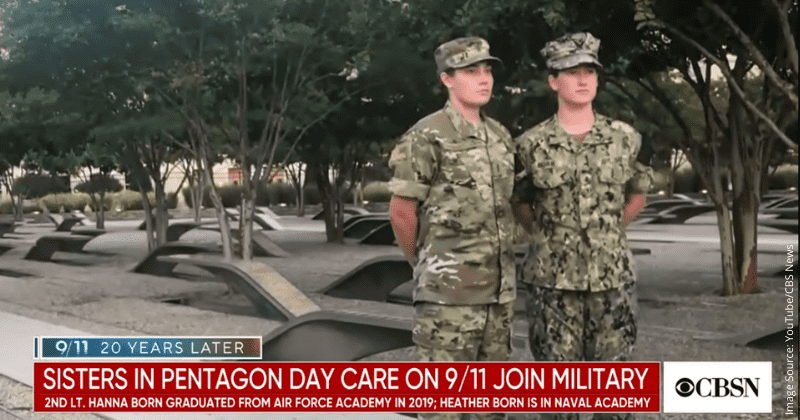 The 9/11 attacks were devastating and have left a deep scar on the collective consciousness of Americans. The attacks were orchestrated by the Al-Queda and claimed a total of 2,977 lives in New York City, Washington, DC, and outside of Shanksville, Pennsylvania, according to CNN. Thousands of others were injured and those who had lost loved ones had to live with the burden of the loss they experienced. Four US commercial planes were hijacked by Al-Queda terrorists. Two of the planes crashed into the World Trade Center towers in New York, a third plane crashed at a field in Pennsylvania after the passengers and crew diverted the plane from the original target. The final plane crashed into the Pentagon in Washington.

Emergency service workers and the US military displayed immense bravery at the Pentagon and World Trade Center. While many people died, many others escaped death narrowly. One of the most heroic accounts from these locations is that of the teachers and caretakers at child-care centers. Shirley Allen, director of the Children's World Learning Center, at the Pentagon managed to successfully evacuate the 148 children in her care, the Wall Street Journal reported at the time. Among them were two sisters who made it through the ordeal.

An infant girl and her older sister were in the Pentagon day care center on 9/11. Today they're in the U.S. military. https://t.co/fgilKZhFqm

Hanna and Heather Born were babies at the time of the attack. They were so inspired by the actions of those around them that they decided to serve their country by joining the US military also since both their parents are from a military background as well. Today, Hanna is Second Lieutenant and Heather is a midshipman in the Naval Academy's class of 2023. At the time Hanna was three years old and Heather was only four months old. Heather has no memory of the day at all while Hanna has retained fragments of the memories from the fateful day. "I was in the daycare center playing and dancing with some of my classmates," Hanna told CBS News. "We were playing with those dance ribbons, and then the next thing I can remember was kind of being in the hallway."

An Infant Girl And Her Older Sister Were In The Pentagon Day Care Center On 9/11. Today They’re In The U.S. Military https://t.co/tc6j2USHKE pic.twitter.com/hgz3MmtXh1

Hanna recalled feeling a sensory overload, especially after exiting the building. "Because that's when you really saw just a groundswell of people coming out of the building," she said. "Obviously, you had the noises from the fire alarms, you had basically every type of emergency vehicle, the sirens from that, and you had jets and helicopters from overhead making noise, and on top of that, just a really acrid smell from the burning jet fuel and smoke." The kids were evacuated from the center and since many of the workers there were elderly, emergency service members helped them move the babies and infants. They were put in cribs and taken to a park nearby.

"I don't think we know really any of the names of anyone involved," Hanna said. "Despite not getting any public recognition for what they did that day, I just hope they know how their actions have inspired my sister and me and how we hope to pay it forward." The girls' mother is retired Brigadier General Dana Born and was at Joint Base Anacostia-Bolling at the time. Their father, a retired marine, had previously been stationed at the Pentagon. Dana explained how Hanna was deeply impacted by the incident and would spend hours expressing her by drawing pictures.

"There have been so many lives that have been forever changed by the events of that day and everything that has ensued afterward, so I think for us, it's just constantly about remembering and figuring out what we can do to best honor them," Hanna said. Despite the efficient actions taken by the teachers at the daycare center and the government assuring their children's safety after the building was reconstructed at the Pentagon, it was shut down three years later after the government could no longer guarantee the children's safety.