trending celebrity people lifestyle news animals
Two Strangers Start A Gorgeous Duet In The Middle Of Walmart, And It Is Amazing

Two Strangers Start A Gorgeous Duet In The Middle Of Walmart, And It Is Amazing

Donnell Cross heard Cassandra Nelson humming in one of the aisles, and then broke out into song with her joining in. 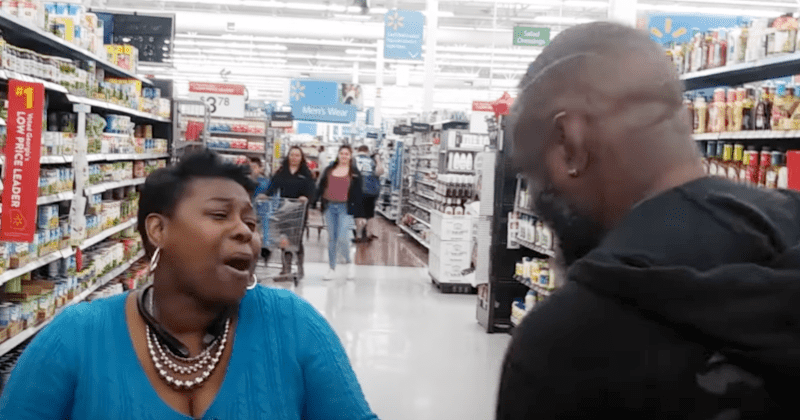 When Cassandra Turner Nelson went to a Walmart store, she didn't have much in mind apart from shopping essentials for the week ahead. She was at the food aisle at the Walmart Supercenter in Alpharetta, Georgia, when another shopper, a stranger, approached her and stopped before her. She was puzzled. She had been humming a song without realizing it and the stranger, Donnell Cross, said he'd heard her humming the song. In a matter of minutes, the pair were busting out a song in the middle of Walmart as other shoppers watched on in silence. The entire episode was shot by a friend of Cross, and the video went viral on the internet.

It started after Cross heard her humming and walked up to her. He turned over to his friend and said, "I’m going to go over there and mess with this lady." Nelson decided to jump in on the game. "I was thinking, 'Is he finna challenge me?' because if he was then I was coming for him," she laughingly said during an interview with Roland Martin. However, she was skeptical about the stranger who was talking about music to her. He asked her if she knew the song "If This World Were Mine" by Luther Vandross and Cheryl Lynn. When she nodded, Cross broke into song without hesitation, starting low before raising his voice in the middle of the Walmart store. They were standing amidst the canned good and salad dressing aisle, drawing the attention of the people around them but he didn't care. Nelson listened in the beginning. He had a rich singing voice and was really getting into his element right there.

Nelson couldn't help but join him. She had an equally stunning voice. Cross didn't know that Nelson's family had a bit of music history in them. Her father is the late gospel singer and preacher Norris Turner. Given her background, she grew up singing backup for gospel acts. They might have been strangers but they sang in tandem with many assuming they knew each other who suddenly broke into song. As their voice reached a crescendo in the middle of the Walmart, other customers gathered around them in awe, whipping out their phones to record their special performance. As people gathered, Nelson's first impression was that they were in trouble. "I wondered, 'Are the police going to come get us?'"she said. "Then the crowd came around and they were smiling and then we were like we can do this."

Encouraged by the cheers and smiles, they finished their song before they joked about how random their duet was. The video went viral on the internet after R&B artist Common came across the video and shared it on his Instagram. That wasn't the end of it though. Common invited them to his show at the Apollo Theater along with an all-expense-paid trip to New York and they brought the house down with their performance. Nelson currently works as a worker’s comp adjuster but hasn't forgotten her musical roots as evident in the video. One can only hope it serves as a motivation for Nelson to get more singing gigs. For starters, Nelson and Cross were invited to sing on the Strahan, Sara, and Keke morning show. She's also hoping to revive the public's interest in that genre of music. "We can do this, bring R&B back. R&B gospel," she said.