Michael Hassey, 22 said the passanger, was asleep for most of the trip and "sprouted up" to assault him just a few blocks away from the destination 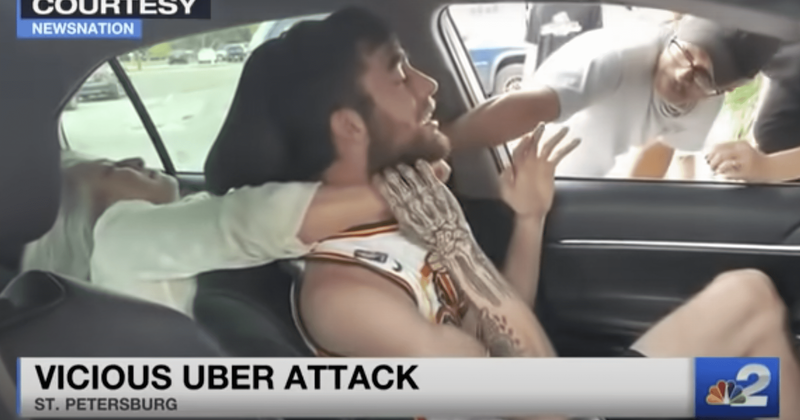 Trigger Warning: The story has videos and details of an assault that some readers may find disturbing

An Uber driver in Tampa Bay, Florida, was choked, scratched, and bitten by a deranged passenger. The incident was caught on a phone camera of passersby and also captured on the car's dashcam. Hassey's video was later released to the media. The latter shows the driver named Micheal Hassey, 22 slowly coming to a stop while being assaulted by 55-year-old nurse Michele Stilwell. He is seen driving slowly while Stilwell tries to choke him from behind. He stops the car and has his hands up and does not fight back while pleading to people nearby to help. Hassey is also seen crying. Stillwell puts her arm around Hassey and then chokes him more. People outside hear Hassey's cry and come to his rescue. They are however in momentary disbelief and confused as to what is happening and do not react for a while.

MEANWHILE IN THE OPEN-AIR SANITARIUM STATE - Florida nurse, 55, chokes Uber driver from behind and then bites into his neck 'like a pitbull' in unprovoked attackhttps://t.co/VpcP6kgPLb

A man and woman are seen trying to remove Stilwell's arms from his neck as she shouts "My daughter! My daughter." She becomes more aggressive and puts her mouth on Hassey's neck and bites him. The driver shouts in pain and ultimately pushes her back and manages to get out of the car taking his phone and keys with him. It is not known what provoked the attack as of now. Hassey told WFLA in an interview, Stilwell was asleep for the major part of the trip and woke up just a few blocks away from her destination and began assaulting him. He reached the front of Cask Social Kitchen in Tampa at around 5 p.m. on Saturday. "When I first pulled up to pick up the rider, a young group of women approached the car and one of them said 'I called an Uber for my mother, can you please get her home safe?'" said Hassey.

He promised the young woman that he would drop Stilwell safely home near St. Pete. Upon approaching her home, Hassey said Stilwell "sprouted up" and became violent while adding, "She started screaming curse words at me and slapped me in the face." Speaking about the assault, he said, "She sinks into my neck like a pitbull, shaking her head and stuff...It’s like reliving a horror movie." Asked about why he did act early to save himself, he admitted, "I let it happen," while adding, "I didn’t put my hands back on her because I have two sisters and I was raised to never put my hands on a female." The police wrote in an incident report Stillwell was "intoxicated." While Hassey wants to know what he did to deserve such violence, he is more disappointed at Uber's lack of response even though he reached out to them several times.

"Uber has not done a single thing or communicated with me about this incident," Hassey said. Only when the channel asked for a reaction to the incident did a spokesperson put out this statement: "What’s been described is disturbing. Violence of any kind is not tolerated on the Uber app, and we immediately removed the rider’s access as soon as this was reported to us."

Hassey was driving a cab to earn some side income, but now he said it was not worth the risk.  "My biggest takeaway is I would stay away from Uber," said Hassey who works as a welder. Stilwell was charged with aggravated battery and tampering with a witness and was in jail but is now out on bond. Stilwell neighbors claim the attack was very uncharacteristic of her.

What kind of foolishness?! They couldn’t just open the door and yank her off of him? And why is he letting himself be bitten by a stranger in the midst of a pandemic?! Everyone in this video is crazy. pic.twitter.com/VcRRl00uWR

It was later found that there was no person named Michelle Stilwell with an active nurse license registered under the state's Department of Health. When asked about the incident, Rob Stilwell, the accused's husband told the channel, "She doesn’t really remember anything, that’s all I can say right now."