Protestors in Portland pulled down the statue using ropes and wrote 'genocidal colonist' on it. 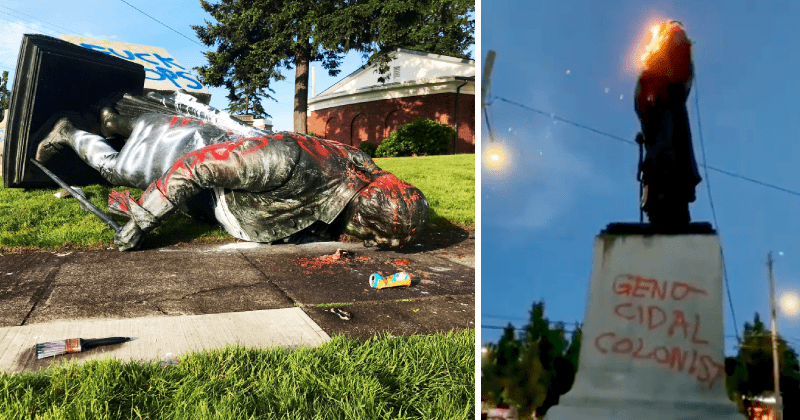 On the eve of Juneteenth, a group of protestors pulled down a George Washington statue that's nearly 100-years-old in Portland, Oregon. They also covered the statue's head with the American flag and lit it on fire.  While there was outrage over pulling down the statue of America's first President, protestors pointed to him being a slave owner, who also killed and destroyed indigenous communities. Two separate groups of protestors — Rose City Justice and Lavender Caucus — held a sit-in rally at Jefferson High School where they shared their experiences of racism and called for racial justice and police reform. Later, at around 10 pm, a group of 20 demonstrators gathered at the site of the large bronze statue of Washington, reported CBS News.

Some protestors draped the head of the statue in the US flag and set it on fire. More people turned up by the statue and soon they had enough numbers to pull down the statue. They used ropes to topple George Washington's statue and left the scene after the deed was accomplished. The statue was also covered in graffiti with the words genocidal colonist spray-painted on the statue. The protestors also wrote F*ck cops on the statue. Portland police arrived a short time later. A small group of protestors continued their demonstration outside the Justice Center but dispersed before midnight. After being exhausted by the continuous protests, they wanted a good night's rest to celebrate Juneteenth, the emancipation holiday. Juneteenth celebrates the day General Gordon Granger informed the enslaved black community that the Civil War had ended and that they were all free. Juneteenth marked the end of slavery in America and has since been celebrated as the day of emancipation by the African-American community.

Protesters in Portland lit a US flag on fire and draped it around a George Washington Statue they later pulled down.

On the side of the fallen statue they scrawled “1619” which is the name of the New York Times project to cancel 1776 as America’s founding pic.twitter.com/eY4BmPw2Ie

While George Washington stopped trading in slaves after the Revolutionary War, he didn't free the enslaved people he owned even after it became legal to free them in 1782. Washington wouldn't free them until he died and even then he left instructions that the 123 slaves he owned be set free only after his wife's death. She freed them a year later, but only because she feared they would murder her for their freedom. As commander of the Continental Army, he also ordered the killing of indigenous communities.

The incident happened on the 21st day of protests following the death of George Floyd, a black man, who was killed by a White Minneapolis cop. The statue of the first President of the United States dates back to 1926 and was also a part of the City of Portland and Multnomah County Public Art Collection. Protestors throughout the world are reassessing the merit of statues, with many being torn down, especially those with who dealt in the trade of slaves.

Earlier this month, Christopher Columbus' statue in Virginia was torn down and dumped in a lake. Videos and photos show people dragging the statue and dropping it into the lake. One placard placed at the feet of the statue during the protests read: Columbus represents genocide. The protestors also brought down the statue of Confederate general William Carter Wickham in Virginia. The state of Virginia has announced that the statue of Confederate General Robert E Lee will be removed after his statue was vandalized in the George Floyd protests. "We no longer preach a false version of history. That statue has been there for a long time. But it was wrong then, and it's wrong now. So we're taking it down," said Governor Ralph Northam.

DOWN... overnight protestors pulled down the George Washington statue that stood at NE Sandy & 57th for many years. The base destoyed and tagged with “you’re on native land”. Lots of people stopping by to check out the damage this morning #LiveOnK2 pic.twitter.com/koStwHacmJ