Liam Scarman from Bristol, UK, died of a diabetic episode in 2017. The desecration of his grave has brought back the pain of his early death for his parents 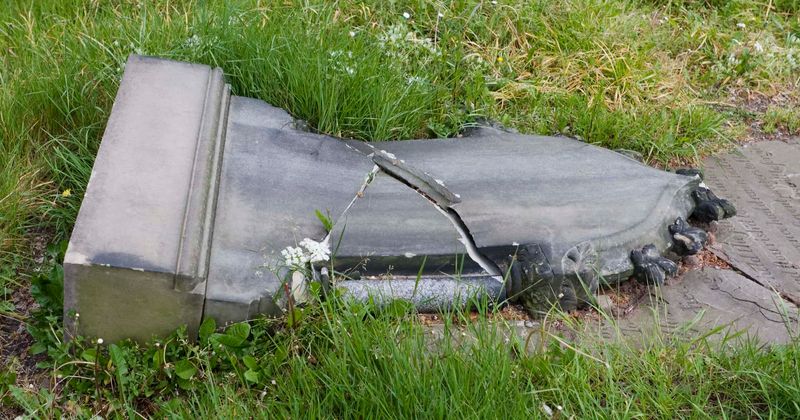 Insensitive thugs in the UK poured white paint on the gravestone of a young man who died of diabetes in 2017. They then left a note mocking the deceased, reports The Sun. Liam Scarman died at the young age of 22 from a diabetic episode on Boxing Day. Despite a few years having passed since the tragedy, Scarman's family is still coping with his death. The vandals also left a note at the grave in Westerleigh Crematorium, Bristol, which read, “Ha Ha Ha Liam. Looks like diabetes won again! P****hole bruv.” Scarman's father, 65-year-old Trevor reported the matter to the police. Speaking about the immense loss, he said, “It’s not only losing your son - you’re also losing your best mate - it’s like someone is sticking a knife in you and twisting it." The incident, he said, has brought back the pain. "You go through all that grieving and this just brings it all straight back," said Trevor.

A spokesperson for Westerleigh Group said: “I can confirm that a memorial stone at Westerleigh Crematorium, near Bristol, had white paint poured over it during the night of November 26 and 27. No other memorials at the site were affected. Police have been made aware and the Westerleigh Group will give its full co-operation to their investigations. Staff from the crematorium cleaned the stone and quickly restored it to its original condition." Since the tragedy, Trevor has immersed himself in work to raise money for the disease. "I need to know who it is, why they did it, I just want justice,” said Trevor, who has since raised over $13,500 for the South West Diabetes Foundation. He said doing work for the cause "kept him going" after the tragedy and added, “We raised money that specifically went towards research to diabetes and I’m so proud of that.”

Trevor said further, "I don’t want anyone else to go through what me and Liam’s mum have gone through.” Scarman's mother, Sue Witt, slammed the vandals and called the attack "absolutely disgusting." She added, “If I thought Liam had enemies, I'd get it but nearly 400 people went to his funeral. He was so well liked by everybody so that's what shocked me most of all." Kyle Maywood, Somerset and Avon Police's Investigating officer, said about the case, "This is an abhorrent crime which has left the family of Liam Scarman absolutely distraught. To commit an act of criminal damage like this is unthinkable. As well as the damage caused by the paint, a distasteful note was also left on the back of the headstone, which has caused additional grief to Liam's parents, who are still coming to terms with the tragic loss of their son three years ago."

He added, "There will be people out there that know who's responsible and I'd urge them to do the right thing and come forward." Trevor highlighted that the cops are speaking to suspects, according to real-fix.com. Maywood said that a team is carrying out inquiries into the case and are also reviewing CCTV footage from the area. He also asked the public to come forward and help in nabbing the suspects. “If you have information on who was responsible, or saw or heard anything which could assist us, please call 101 and give the call handler the reference number 5220267420,” said Maywood. Since word of the vandalism went public, people were enraged. Rosemary Sage wrote on Facebook:
What a disgusting action. Terrible that he could not be roused from his hypo - a threat all type 1s live with - without this sort of behaviour.

trolling a dead man who has long since left this world. this is 2020 for you.

She added: Desecration of a loved one's final resting place is a heartbreaking abomination, and so close to the anniversary of his death. My heart goes out to his family and friends. Another commenter named Joan Tony Roberts stated: These heartless fools dont deserve to be even given a thought. They dont know the feeling of love so should be jealous of your son he will be loved for ever. God Bless. Your son is with you always