Hailey Morinico from Bradbury, California suffered a sprained finger and a scrapped knee and knows she is lucky to have escped with just those injuries 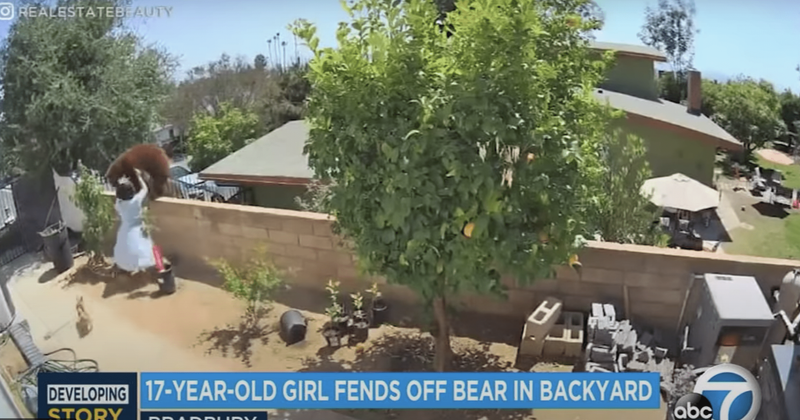 Trigger Warning: The story has a video and details of an animal encounter that readers may find disturbing

A video of a teen girl pushing away a bear from the boundary wall of her house in Southern California to save her pet dogs has gone viral, reports KTLA. Taken from the surveillance camera of 17-year-old Hailey Morinico's home, the video showed the mother bear atop the short wall, along with her two cubs who follow her. As they walk they stop after hearing the barks of dogs who come charging at them. The two cubs are scared and run back leaving the mother against the dogs. One of the dogs charges at the bear but runs away after the animal swats it. The other smaller dogs continue to bark at the animal and that's when the brave girl rushes to rescue her pets. She was seen in the video pushing the animal and falls on her knees. The animal falls back and is dislodged from the wall.

That's enough time for Hailey to take her dogs and run back into the house in the town of Bradbury. The mother bear is seen climbing back up the wall. Hailey and her mother Citlally were in the other part of their home's compound when they heard their dogs barks. The girl said she thought her three dogs were barking at other dogs. She was shocked when she saw a wild bear. “I run to see what they’re barking at and it’s not a dog — it’s a bear. I see the bear, it’s grabbing my dog, Valentina, and I have to run over there. She’s a baby. And the first thing I think to do is push the bear. And somehow it worked,” she said. Speaking about what went through her mind when she pushed the bear, she added, “In that moment, I don’t have much time to think...Honestly, the only thing I had in mind was to protect my dogs and that’s what I did.”

Not enough attention is being given to the mama bear who’s clearly just trying to protect her two cubs from the menacing dogs.

Her mother said, “It’s horrifying to see your daughter approach a huge bear and just thinking that the bear could have swiped at her face and we would be having another kind of news today.” Hailey only suffered a sprained finger and a scraped knee. She and her dogs are safe and okay. She knows the outcome could have been very different and much more serious considering a wild animal was involved. Both Hailey and her mother said they were thankful for that. After she pushed the animal, she said she ran for her life into the house as quickly as she could. “By the time that the bear got pushed over, I was out of there with my other dog,” said Hailey. The family said they regularly see bears and other wild animals in and around their home.

As we humans continue to encroach on animal habitat, close encounters with wild animals will become increasingly common. Instead of destroying animal habitat, we need to start rapidly increasing it or entire ecosystems (upon which we depend) will collapse.

This may probably be because the town is located in a rural country "nestled at the base of the San Gabriel Mountains below Angeles National Forest in Los Angeles County." Hailey and her family just moved into the house in February. Citlally said she spots bears in the neighborhood at least two to three times a week but this kind of direct encounter was a first. They have cautioned others to not try what Haily did. “Do not push bears. Don’t do what I did, you might not have the same outcome,” said Hailey. According to experts, the mother bear was only trying to protect the cubs. Rebecca Barboza, a wildlife biologist at the California Department of Fish and Wildlife, told Fox News, “They are not inherently aggressive toward humans or our pets."

The mom turned into the mamma bear and it probably wasn’t the smartest thing. She’s lucky.

She added, "She was reacting to the perceived threat of the dogs, and if this animal was inherently aggressive, those dogs probably would have been attacked and not just swiped at."