Florida Cop Slams Girl Student To The Ground, Knocks Her Out In Shocking Video

The incident took place at Liberty High School in Osceola. The Sheriff's Office put out a statement about an investigation being underway. 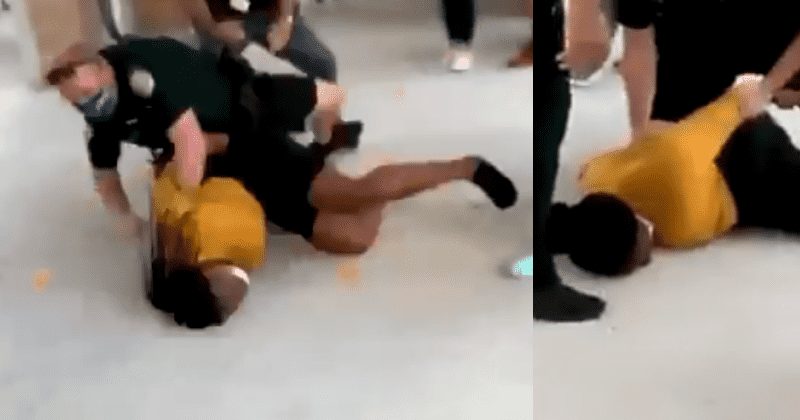 Trigger Warning: The story has graphic details and videos of racism and police brutality that readers will find disturbing

Viral videos of a school student in Florida being slammed to the ground by a police officer has caused widespread anger and uproar. In the videos taken at Liberty High School in Osceola, and later widely circulated on social media, the girl in a yellow sweatshirt and black Bermudas is seen being body-slammed to the side. She lands her headfirst with a thump and then is knocked out cold. The officer then cuffs her while she is motionless. The other students nearby seem clearly horrified.  The deputy involved in the incident was confirmed to be one of Osceola County Sheriff's "School Resource Officers", according to a statement released on Tuesday by the Sheriff's Office on its Facebook page.

The @OsceolaSheriff is investigating what happened in this video. You see an SRO slam a student to the ground, appearing to knock her unconscious.

This happened today at Liberty HS in Kissimmee. The deputy was reportedly trying to break up a fight. pic.twitter.com/pEcyVtQ3p9

It added, "Today the sheriff’s office received information from school officials at Liberty High School about a video posted on social media depicting one of our School Resource Officers in a confrontation with a student. The incident appeared to take place between classes in the hallway. In the video, it shows the deputy taking the student to the ground and placing handcuffs on her." The Sheriff's office stated that an investigation was started into the incident and that they were collecting video, witness statements, and other relevant information connected to the incident. "We know that the School Resource Officer was in the process of trying to stop the student from fighting another student in the hallway when the deputy took her into custody. Once we receive more information related to the incident, we will provide an updated press release," the statement added.

Bro this cop at my little brothers high school, slammed & KNOCKED out this little girl, wtf is wrong with these pigs! pic.twitter.com/bfEZkuXkXO

Dana Schafer, a spokesperson for the Osceola County School District, confirmed the incident took place at Liberty High School but refused to comment further on the incident, reports Orlando Sentinel. Demeatra Bodie is a parent whose son is at the same school. Her child, however, did not witness the incident. She told WFTV, "I was like, What in the world? I have to do something...I can’t just let this go. If we were to do something like that to our kids, we will be in jail. No questions asked...we’re going to jail until they figure it out. We know that they’re there for safety reasons, but they need to be trained on working with kids, because kids are going to give you problems. They give us problems as parents, but we’re not going to just beat on our kids and knock them unconscious.” As of now, the condition of the victim remains unknown.

High Schooler's are under 18; I did not see a gun! This was un-called-for. I think the girl is out cold. There is something wrong in this Nation when an adult-armed-male attacks a female with such force. There is no excuse this cop could give me.

Online people were outraged at yet another example of police brutality Rebekah Castillo Velazquez commented on Facebook: You can’t spank your child for acting up, or you’ll get your child taken away, and likely end up in jail. Yet THIS.... slamming a kid head first into the ground is okay because she was ABOUT to get into a fight!?!?!? This is the world we live in and that I’m terrified of raising my kids in. Many people, like Felicia G Estes, questioned the need for police officers in schools. She wrote: Police officers should not be in schools if they must be they need to be trained how to deal with children/ teens! I this is appalling behavior by the officer! I hope the girl is receiving the health care she needs and the county is paying the Bill.

Could someone please provide an update on the girl's status? She didn't look like she was even conscious while he was putting her in handcuffs. Please let us know if she is ok.

We recently wrote about an incident where an autistic boy was handcuffed and pinned to the ground by a school resource officer for almost 40 minutes until his mother arrived to rescue him. The child was a student of the Pressly Alternative School in North Carolina. The officer was called after the school staff about an agitated boy who was spitting around. While the incident took place in 2018, videos of the same surfaced last year and caused widespread anger.