A Company's CEO Harassed Teen Boy Who Wore A Prom Dress: "You Look Like An Idiot", Gets Fired 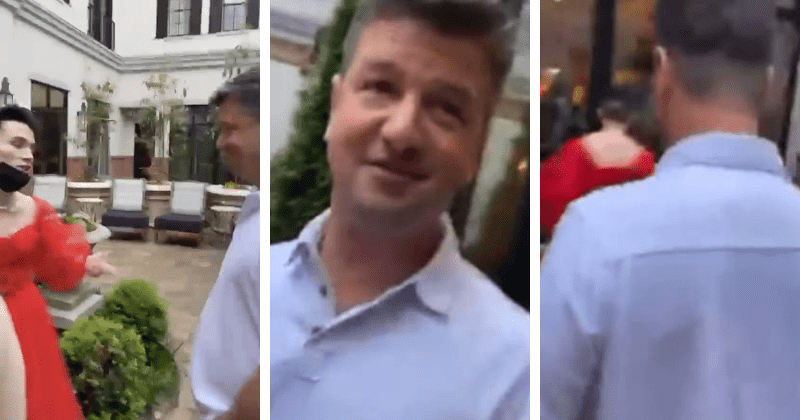 A CEO of a telemedicine company has been receiving a lot of flak after a video of him interacting with a teen boy went viral. VisuWell CEO Sam Johnson was seen in a TikTok video insulting a teenage boy who wore a full-length red prom dress. The incident was caught on camera by Jacob Geittmann, who was celebrating prom with his boyfriend Dalton Stevens, who wore the dress as a form of expression and to help "break the stigma around men wearing dresses." According to Newsweek, the incident took place at a hotel in Tennessee during which Johnson can be seen in the video following Stevens around.

The high school senior in the red dress can be heard telling Johnson, "I chose what I wanna wear so you can f*** off," to which the CEO retorts, "Is that right?" Stevens then walks away from Johnson, who subsequently follows, stands near the high schooler, and says, "You look like an idiot." The teenager shouts back "F*** off" at Johnson and "Get the f*** away from me."

At one point when Johnson then seems to notice Geittmann filming him, it looks like he attempts to hit the teen and/or his phone, almost smacking Stevens in the face. "No sir, I can f—ing record you all I want," says Geittmann. "Keep talking. You look like a moron." By the end more people have approached Johnson to get him to be an adult and leave the teens alone."It’s just prom. It’s kids, it’s a bunch of kids," says one voice. "Come on, dude." Stevens can be heard saying "I'm sorry, I'm gorgeous," to which Johnson replies, "Are you?"

However, Johnson denies harassing the kids or being homophobic. But Geitmann has a different story to tell. He stated that Johnson began harassing his boyfriend with "homophobic banter" as the couple was about to leave the hotel, where they took photos. "This man comes up, stands about an inch behind my boyfriend and asks 'What are you wearing?' and he's like 'A dress, why?' and he's like 'Well why are you wearing that? You shouldn't be wearing that,'" Geittmann said. Johnson apparently began going "on and on" about the boy looking "disgusting," "ridiculous" and "an idiot."

If someone else's existence isn't your flavor, and they're not hurting anyone else....move your azz along.

Following them around with that stupid smile is just creepy predatory behavior. Reminds me of a certain someone during a debate a few years ago.

Johnson denied the allegations as "entirely false," telling the media outlet that the confrontation "wasn't anything personal or involving a dress," rather "about obnoxious, loud behavior by this group of teens." Johnson said he had approached the teenagers to ask them to "tone down the vulgarities around the families and children who were present," including his own. "We had just sat down for dinner at this restaurant that we frequent, and I was returning from the restroom when I was presented with their loud cursing," Johnson said. "Making it about the dress was their idea and they edited out most of the exchange."I have no ill will towards anyone or their personal choices, so long as it does not harm me or my family," he added.

Post 1/4: We unequivocally condemn the behavior exhibited by Sam Johnson in a recent video widely circulated on social media.

Visuwell put out a tweet stating that the CEO has since been fired. They wrote: After investigating the matter and speaking to individuals involved, the VisuWell BOD has chosen to terminate Mr. Johnson from his position as CEO, effective immediately. Gerry Andrady, our President and COO, will lead the company through this important time. VisuWell’s culture emphasizes respect, kindness, and compassion, especially for those from traditionally marginalized communities, and we maintain a zero-tolerance policy for intolerance of any kind.

it was my beautiful boyfriend wearing the dress but I’m more than happy to share some pics!! pic.twitter.com/DmSdG4uOKj