Wayfair has denied the sex trafficking allegations and said, "There is, of course, no truth to these claims." 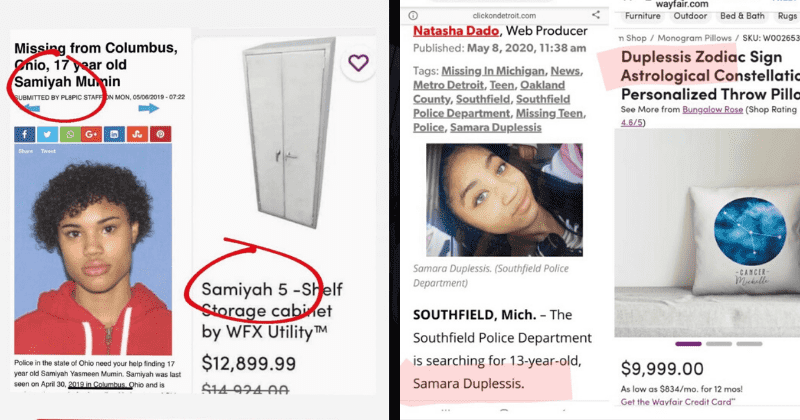 American furniture and home-goods company, Wayfair, has been accused of child trafficking. The company that sells furniture became viral on social media when thousands of people started indulging in a theory about the company on Twitter. This conspiracy theory came into place when customers started noticing how the company was selling a few items for a rather expensive rate. Items like storage cabinets and throw pillows were charged excessively. Even though all these had a similar appearance, they allegedly had different names written on the description section of the items.

Y’all call me crazy but I feel like they timed that #Redtabletalk EXACTLY when we all tapping into the fact that wayfair might be a HUGE hole for SEX TRAFFICKING kids and yall know dam well the higher ups be controlling media DO NOT STOP TALKING ABOUT THIS!! Its not a coincidence pic.twitter.com/S2PaOzd6d1

Some people who took to social media believe that the e-commerce company is using their high-priced cabinets and throw pillows, costing nearly $10,000 to $12,000 and $9,000, to sell “missing children”. Twitter users posted pictures of the overpriced cabinets, alongside the alleged list of people’s names who they claim are missing. The user's post also claimed that although the cabinets or the "large boxes" looked like the same product, they all had different names, mostly girls, and particularly of missing children. A user pointed out: How many people do you know with the name Samiyah and Yaritza? don’t know about you but I would rather be questioning why these utility cabinets have girls names that are ~$15k and turn out to be wrong than defend what could be child sex trafficking and have it turn out true.

So I looked up the store on #Wayfair that was selling the cabinets and found rugs still selling for 10-30 THOUSAND dollars with name matches for missing children/women? The site may not be up to something but this company using them are. It's too coincidental. More in thread pic.twitter.com/jV5Xjpi2pm

Another user posted: People are suspecting that they're selling people in these large boxes/storage cabinets on Wayfair. They all are the same products but have different names, all female names. And they are priced $10k-15k more than the cabinets sold elsewhere. #ChildTrafficking. Multiple users also claimed that after many people started talking about these suspicious listings of cabinets on Wayfair, the listing disappeared. While others suggested that people can still Google search those images from the website if they are interested.

um so the founder of Wayfair also runs Shah Family Foundation, which is heavily involved in the ‘education’ of, you guessed it, CHILDREN! #wayfair #wayfairtrafficking pic.twitter.com/fbD1oL1hEn

A user named Luna shared: people don’t believe me but now it’s not coming up on the website but you can still find it on google. I’m not randomly going to go missing and I don’t take spontaneous trips and disappear btw. In the same thread, it was shared: Somebody posted about this on Reddit and their account got reported. Another person talked to Wayfair for an explanation about costs/specs and they could not give an answer. They called the trafficking hotline and they are reportedly opening a case. We'll see how this turns out. Many users brought into the conversation a new thread on how Wayfair had another alleged history of selling furniture to migrant detention facilities, where thousands of immigrant children were housed.

They also shared information on how the employees of the company protested the company’s decision last year by staging a walkout. "So let's get one thing straight before jumping the gun. We don't know everything," a user posted. "Let me also close off by asking a question. If child trafficking was happening all under #WayFair's nose, how come the former Wayfair workers (turned protestors), did not say anything about it?" Many other users, including Redditors, reported that they searched the SKU codes of all these suspicious listed items on Yandex, a Russsian search engine, and found that the search results allegedly showed the images of little girls.

Wayfair is being accused of sex tracking children. People say the reason why some things cost so much is because it comes with a child.

Do y’all think this is real or just a conspiracy?#wayfairtrafficking #wayfair pic.twitter.com/JyA2KvhLzI

However, the search results would be the same, if a user combines number preceded by “src usa”.  The alleged claims made on social media is yet to be presented with evidence outside screenshots of the human names along with the overpriced items listed on Wayfair. Wayfair removed the items from their website and released an official statement giving an explanation as to why the listings were removed: "There is, of course, no truth to these claims. The products in question are industrial grade cabinets that are accurately priced. Recognizing that the photos and descriptions provided by the supplier did not adequately explain the high price point, we have temporarily removed the products from the site to rename them and to provide a more in-depth description and photos that accurately depict the product to clarify the price point."

@FBI PLEASE WATCH !! Theirs too many coincidences #Wayfair #wayfairchildtrafficking pic.twitter.com/Ug484LiZCm

Wayfair Preparing their staff for all the calls they are about to get.
Note: If the Media calls send them to (PR) PR@wayfair.com pic.twitter.com/RjEswzWVA9