A white German model had decided to take Melanotan injections for two years, resulting in a lot of unnatural changes. 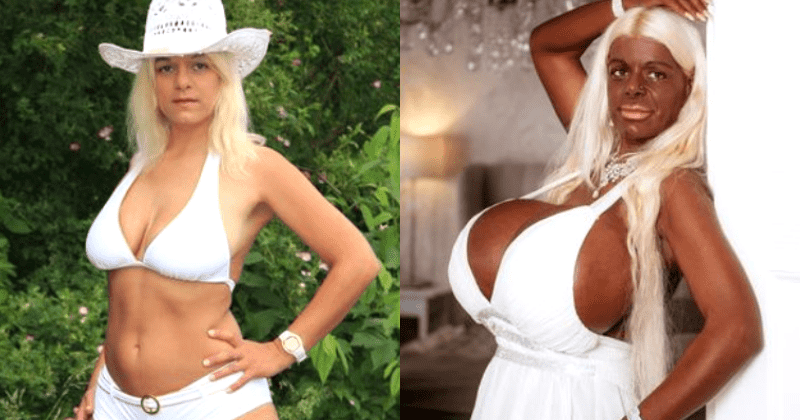 It seems like what was once considered taboo is now being pushed across several spectrums and domains, and in bizarrely racist ways. In this particular regard, we are talking about the physical changes one can make to their bodies via modern technology. While all this is up to personal choice, some of the results do leave us questioning whether it's even worth it in the first place. Take Martina Big, for instance, and her idea to "change her race". She is a white, blonde German 'model' who admired the beauty of Black women. She wanted to become one, so she started taking tan injects over two years, and it resulted in her skin looking darker.

Big now "identifies" as a Black woman and she even took a trip to Kenya to learn about the African community's culture. She got "baptized" in Nyeri and adopted a Kenyan name—Malaika Mkubwa, which stands for ‘Big Angel’ in Swahili, reported a local source. She also posted a video of the ceremony on Facebook in which a man can be heard saying, "Malaika Mkubwa, you are now a new creature in Jesus’ name.” “Today I would like to tell you about a highlight of my Kenya trip. My church baptism to a real African woman. One of my Kenyan friends told her pastor about my transformation to a black woman and told him how much I wanted to become a true African woman. He invited me to his church in Nyeri. There he baptized me to the name Malaika Kubwa,” she posted. Other than her skin color, she got surgery to augment her lips and breasts as well.

It wasn't easy, or cheap for that matter, for Big to pursue this goal. She had to spend millions of dollars to look like how she does now. Big put herself through several surgical procedures and implants, to the point where her breasts now weigh about 12 kgs (over 26 lbs) and she is known as the woman with the biggest boobs in Europe. Not to mention, getting tan injections is hazardous and even banned in several countries, but she had them anyway, to change her skin color. She recently appeared on the famous British show This Morning and claimed that since "she's a Black woman now", her babies will be Black too.

Big is currently married to a white man named Michael, who is also willing to undergo the same tanning process for the sake of their love. After that happens, Big believes that they can make Black babies together. She told the hosts of the show, Holly Willoughby and John Barrowman, that her doctor has told her that the couple can have Black babies. "It’s a mix of Michael and me. I’m pretty sure it will be black or milk chocolate or a little bit light, it doesn’t matter."

"My children will be black. We are not having plans, but I am discussing with my doctor to see if my body is okay, will I be able to breastfeed, what the baby will look like," she added. The wannabe-Black couple was spotted wearing traditional African clothing as well which sparked an obvious outrage on Social Media. “#ThisMorning so because she's had skin darkening injections she thinks she will have black babies?! Did I hear her say she doesn't mind if the child is 'milk chocolate'?! OMG!!!” tweeted a viewer. The show also received major backlash for airing the racist interview. "@thismorning why was #MartinaBig not called out on her racist behavior? The woman has darkened her skin, identifies as a black woman, and even got baptized as a REAL AFRICAN WOMAN *and even claims tanning injections will make her unborn babies black! Huh?" tweeted an angry viewer, along with many others.