The photos have amassed more than 8,000 shares and were even re-posted by the Vilas County Sheriff's Office. 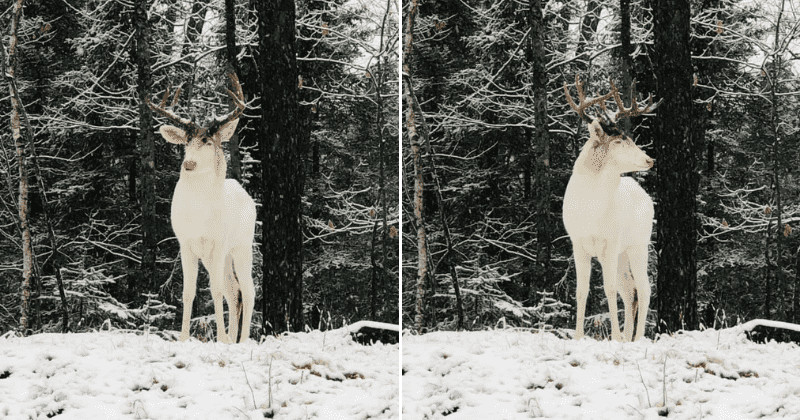 America's Dairyland is also a great place to spot some rare and gorgeous creatures. There are dozens of woodland creatures that like to stroll around human settlements, causing minimal damage. One of the more common sights seen at backyards are bucks, who like to indulge in their own form of curiosity regarding our land and property. A Wisconsin woman was exceptionally lucky as she happened to stumble upon not just any buck, but a rare and spectacular albino buck in her own backyard. Tracy Weese snapped a pair of photos that pretty much broke the internet, amassing thousands of views and shares in no time.

Weese was just peering across the snow-covered backyard of her Boulder Junction, Wisconsin, house when she saw the remarkable deer strutting by. "His Majesty just strolled through our backyard," Weese wrote on Facebook, where she shared two photos of the animal. The deer must have certainly caught her by surprise as it is extremely rare to spot this variation of the buck species around. A photo was later shared by the Vilas County Sherriff's Office, which called the albino buck 'an incredible sight to see.'

The photos became so popular that they garnered more than 8,000 shares since they were first uploaded on Monday, reports Daily Mail. Many commenters on Weese's post shared their delight at getting to see such a deer, and called it "majestic" and 'stunning'. Weese went on to clarify that the deer was an albino and not a piebald. Piebald, or pied animals, have a pattern of unpigmented spots on a pigmented background of hair, feathers, or scales. She added that the brown patch spotted on the deer's head was 'from him rubbing his antlers and head on trees when shedding his white velvet. "The brown stain on his leg is his tarsal gland releasing his scent as he’s in a rut. He looks different right now due to rut." Rut refers to the deer mating season.

A rare albino whitetail deer buck has been spotted and photographed in northern Wisconsin. https://t.co/Y5hHWeUtAa

It was unclear as to how large the albino deer was; the average buck measures from six to seven feet and will weigh around 300lbs. These White-tailed deer have a typical lifespan of between six and 14 years, whereas albino deers tend to live a bit shorter. Most albino and piebald deer die before adulthood, according to experts. Despite the deer's beauty and grace, it is noted that their recessive genetic traits and defects would prove detrimental to the deer population were they to flourish.

Except it is against the law to shoot an all white deer in WI.

"They are an unusual sight because they either have multiple physical problems and die early or because of predation," Ed Clark, president and co-founder of the Wildlife Center of Virginia, told Associated Press.  "Protecting them would not be doing the deer population any good because it would pass the recessive genes into more herds." “It was startling to see something so purely white in a background of dark brown and especially in the evening. It really stood out,” said Tommy Tracy II, who recently photographed a bright-white doe sitting in a field of green. “I’ve seen white does twice and it’s always around Cherry Avenue and Highland Avenue.”

Oh, deer: My spirit animal of hope for 2021 has arrived early #HisMajesty 🙌🦌👑 https://t.co/oTUyjouFu6

“The public has consistently shown an interest in preserving the white deer, if at all possible,” Mike Murphy, assistant city manager, said of the recently implemented deer-culling program. “There was an instruction given to our selected wildlife management firm to avoid shooting white deer. The program has ended for this year and the instruction was honored.” “The piebald condition is frequently associated with other harmful physical conditions, including skeletal deformities,” according to the Virginia Department of Game and Inland Fisheries's website. Among those deformities are bowed noses, deformed legs, curved spines, stubby jaws, and internal organ deformities. “Piebald deer are rare, typically occurring at less than 1 percent of the population,” the game department website says. “Piebald deer can be more common on a local basis, especially in areas where deer hunters protect them.”

In Chicago there is a ton of albino deer.. they are all by Argon National Labratory 😳