Octopus Attacks Woman's Face After She Tries To Eat It Alive, Latches Onto Her Cheeks

In the 50-second video, we can see her screaming in pain as she struggles to wrestle the octopus off her cheeks. 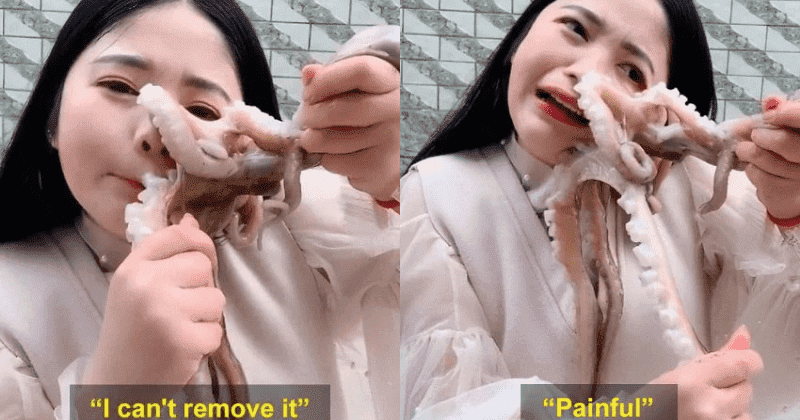 Trigger Warning: This article contains a graphic video that some readers may find disturbing

What happens when the food you're eating ends up eating you? Well, the results weren't so bad in this case but it sure gave a glimpse of what it could look like. The unfortunate human being who faced the brunt of this unexpected attack was a Chinese vlogger who was live-streaming herself as she attempted to eat a live octopus, reports The Independent. Although the video began as all fun and games, it took a very dark turn after the animal latched onto her face and refused to let go. To top it off, the tentacled-beast ripped off part of her skin in the process.

Proudly #TeamOctopus. It’s called #karma, girl. Looking forward to her next vid, when she attempts to eat a live piranha. https://t.co/6dda68xw7t

In the 50-second video, posted by the woman "Seaside Girl Little Seven" on the Chinese video platform, Kuaishou, we can see her screaming in pain as she struggles to wrestle the octopus off her cheeks as it begins to wrap its tentacles onto the side of her face. The vlogger can be heard terming the animal’s suction “painful” as she tries hard to remove it. When she eventually pries the animal off her face, she realizes that it has left a bloody cut on her cheek. The vlogger is a popular sensation on the site where she regularly posts videos of herself eating and playing with seafood.

These new face peels are getting really ridiculous. https://t.co/8zGRygasje

The video of her unfortunate situation went viral since she posted it with her name going on to trend on various Chinese social media platforms including Weibo, and subsequently making it to other parts of the world as well. One video of the encounter uploaded to Twitter has been viewed as many as 926,000 times, with people expressing their horror at the unfortunate happenstance. Not all of them, however, sided with the woman though with some even saying it was "karma" biting at her for trying to eat the animal alive.

Eating octopus and other seafood alive is a common tradition in many parts of the world like China, Japan, and Korea but that doesn't mean it's healthy at all. In fact, octopuses can be a major choking hazard not solely because they can fight back but their suckers can kill you if not ingested properly. Speaking to Insider, author and nutritionist Jenny Tschiesche said: "It comes with a safety warning. It's not recommended. There's a choking hazard predominantly from the suckers getting stuck to the inside the throat, leading to the octopus causing an obstruction." There's proof that it can be deadly too. As per a report from April 2010, a South Korean woman collapsed and stopped breathing after she ate a live octopus, and died in a hospital 16 days later. Sensing foul play, the woman's boyfriend was convicted of murder, which was later overturned in the Supreme Court.

Jennifer Mather, Ph.D., a professor of psychology at the University of Lethbridge in Alberta, who's also a cephalopod expert, spoke to Vice and said an octopus can "anticipate a painful, difficult, stressful situation - they can remember it." This explanation gives us a glimpse into why the octopus in the vlogger's case retaliated in the way that it did. As per National Geographic, the tentacles on Octopuses are lined with hundreds of suckers, all of which can act independently as they are equipped with a  "complex bundle of neurons that acts as a brain, letting the animal touch, smell, and manipulate objects".