Woman Ends Marriage After Husband "Shushed" Her During Childbirth: "I Deserved Better"

Her story was shared in a Facebook group called "That’s it, I’m MF spouse shaming" 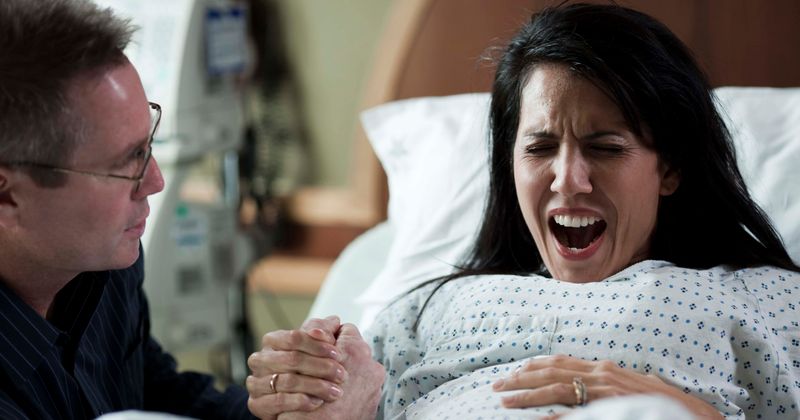 When you take your wedding vows, you expect your partner to be there for the good times and bad. No one expects a "perfect" relationship, but you'd hope for a strong, supportive partner who treats you kindly and with respect. Pregnancy is different for everyone, but having a partner by your side, helps make the rollercoaster ride a whole lot easier.  One woman learned the hard way that her husband was not as understanding as she had once thought.

According to The Mirror, women have been sharing their stories on a popular Facebook group on why their marriages ended. The group called "That’s it, I’m MF spouse shaming​", had more than 21,200 members at the time. While some women ended their marriages for obvious reasons such as cheating and adultery, for others it was due to finances and differences in money management. The stories ranged from heartbreaking to inspiring. However, it was this woman's story that stood out. She commented that it took place during her labor when giving birth to their child. Her husband allegedly had the audacity to tell her to "shush" while she was trying to bring their child into the world. She wrote: When he told me to shush during labour. I had a sudden flash of clarity and I knew I would be raising this baby alone because I deserved better. Still took me a year to get to the breakup, but I never forgot that moment of certainty.

Many responded to the story online in shock and anger. GgLexC wrote: i’d cuss him out during labor then fight him after LMAO don’t tell me to shush. Al_Khee joked: I’m surprised he survived the delivery. spreadoperator_ wondered: Surprised she didn't kill him but also, how much did she tolerate up until this point? To which Bethany_Zi responded: Exactly. If he had the audacity to say that to her while she was delivering a baby, then he definitely said some other fucked up shit before that.  GunnerWillie felt the whole thing was "petty", writing: This is sad honestly. Waiting all the way till you have someone’s child, to give up on your entire relationship over something so petty is childish. Cloudy_Musicali replied: She waited a year after that to end it. She just said at that point she knew it was over.

I’m assuming because they said the marriage was over and not his life.

Whilst giving birth? Wow my blood is boiling.

I’m in the group that the post came from. You should see the one about the marriage ending because her husband was sleeping with his step sister 🥴🥴🥴😩

If you'd like to save your marriage and not be a total douchebag, here are some ways you can support your partner while they give birth. According to motherly, be prepared and take a childbirth education class together. Discuss birth preferences as Birth Editor, Diana Spalding, shares, "It's really important for couples to have lots of conversations about her birth preferences ahead of time so that her partner can advocate for her while she's in labor. It's not that she won't be able to talk, of course—and she should be included in the conversations—but it's nice when the partner can help her get her wishes expressed." While labor may take a while, help by being there for her for the small stuff. Get her something to eat, put on her favorite show, or give her a gentle massage. Just asking her what she wants to feel better will show that you care! And while she's in labor, don't tell her to "shush." Instead. use positive words of encouragement and support. Talk about how in awe you are of her and her strength. Tell her that you love her and she's going to be the most wonderful mother to your baby. Say things like, "You're doing amazing!" or "I'm so proud of you!" We really shouldn't be pointing out the basics of how to be a nice person, but we never expected there to be "shushers" in the delivery room! Husbands and partners, come on, you do better.