Christine Jones, from Armidale New South Wales, found the arachnid when she tried to open the door. She narrowly missed coming into contact with it. 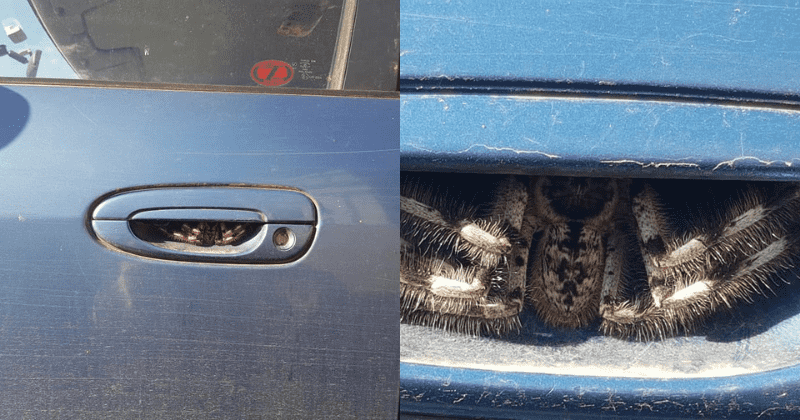 An Australian woman was scared out of her wits when she discovered a huge spider cozily relaxing under her car door handle. Christine Jones, from Armidale New South Wales, found the arachnid when she tried to open the door and narrowly missed coming into contact with it. Posting on a Facebook page called Australian Spider Identification, Jones said she thought it was a "hairy caterpillars at first" but upon closer observation, things turned out to be far, far worse, reports News.com.Au. She added that the experience was so scarring that she hadn't touched her car or driven for a week. People in the comment section were full of questions for Jones. "Did you touch it or see it first?’ one user said. "Saw it at last moment," the OP replied.

Anita Lauricella added: "He/she certainly looks very cosy, and with a good view of the world. Lucky you saw it first." There seemed to be some experts in the comment section who pointed out that the hairy spider was possibly from the Huntsman family in which there are over 155 species of spiders. A commenter, Debbie Wagenaar, shared a similar experience she had the same day: "I went to get the groceries out the back of my car today and there was one hiding where the door fits into the frame. I promptly closed it and went around the other side." Vanessa Plumer seemed to have had a far worse encounter, where the arachnid popped out when she was on the move. "Eek. I had a huntsman pop out from the visor on the inside. Whilst driving."

Those who hadn't experienced this took it as a lesson to always check the doors. Lele Lewis wrote: "This is why i dont like these kind of door handles." Kirraleigh Thomas made a joke about her family judging her for being careful. "And my family & friends think I have issues for always checking the handles & the petrol cap." Danielle Griggs pointed out: "Great another spot I have to check when entering my car besides the sun visors!!!!"  Before closing down the comment thread, a moderator by the name Johan Kruger pointed out that the spider was "Holconia insignis - Banded Huntsman". These spiders are said to be found in south-east Queensland are relatively harmless in spite of their large hairy appearance. They have a venomous bite which can cause illness. However, they are very reluctant to bite and would rather run away than be aggressive.

According to Australian Museum, "Huntsman Spiders are found living under loose bark on trees, in crevices on rock walls and in logs, under rocks and slabs of bark on the ground, and on foliage. Dozens of the social huntsman species, Delena cancerides, can be seen sitting together under bark on dead trees and stumps (notably wattles) but they can also be found on the ground under rocks and bark slab." If bitten, one should apply a cold pack as a remedy to treat the bite. If pain and symptoms persist, one must approach a doctor.