"It was just looking at me," she said after she spotted the pattterned discoloration on the potato skin 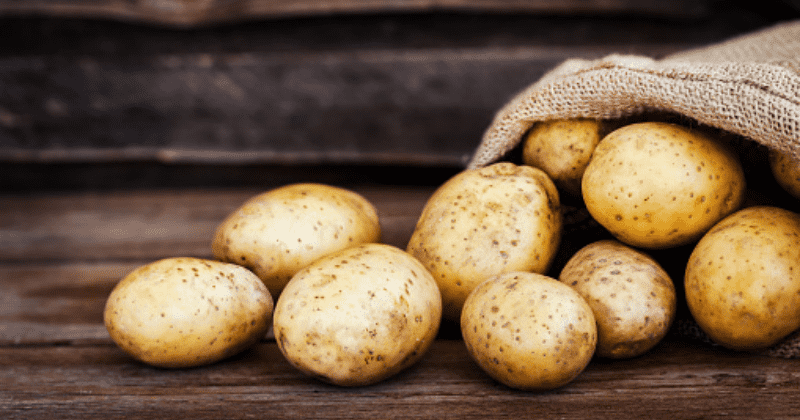 They say God is everywhere and there is no place he can't be. As if to prove this point, Jesus appears on random consumer goods from time to time. Jesus' face has been seen on toast, coffee, tortilla, among other things, perhaps to serve as a reminder of his omnipresence. In his latest appearance, a woman from Scotland happened to see Jesus on a potato. At least that is what 44-year-old Nikki Halkerston is convinced the markings on the potato skin were. She even took a picture of the potato and there actually happens to be a face on it. Is it Jesus though? You decide.

Halkerston returned after shopping for groceries at Aldi, a renowned supermarket chain in the UK. As she was unpacking, she came across an odd spotting on the potatoes. It was not mold or just any other ordinary patch. What she saw was Jesus. "As soon as I put the packet on the kitchen top I saw it," she said and added, "I was staring at it and it was just quite obvious it was Jesus' face. It was just looking at me." According to Mirror UK, the Dundee resident immediately called her husband to take a look at it and confirm if there was indeed a pattern that looked like Jesus. Even though he is "usually really skeptical about these sorts of things" Halkerston's husband could not deny the uncanny resemblance.

After taking several pictures of the face that resembled the son of God, she promptly ate the spud that she got for about $1.50 at the store. So if you were hoping to go see it for yourself, you can't. "I've seen stories before about people finding Jesus in their food but I can never usually see it. This was just so obviously him," Halkerston stated. "I called my husband into the kitchen and he's usually really skeptical about these sorts of things. He never gets over-excited about anything but even he agreed it looked like Jesus!" The discoloration may look like different faces for different people but there is actually a phenomenon to explain why this happens.

According to Artsy, "Seeing faces in inanimate objects is common, and it has a name: pareidolia. It’s a psychological phenomenon that causes the human brain to lend significance—and facial features, in particular—to random patterns." The most famous case of pareidolia is when a woman from Florida, Diane Duyser, claimed that a toasted cheese sandwich had an image of the Virgin Mary. But unlike Halkerston, Duyser saved the slice and sold it for $28,000 on eBay. The bread is now over a decade old and cannot be consumed. It is only meant for viewing purposes now and is believed to have mystical powers.

But more recently another woman Scottish woman had also spotted a Jesus face on a tattie scone. The Daily Record reported that 26-year-old Amy Cathrine McCue noticed the son of God's face "dripping in grease" as she prepared the famous Scottish delicacy. "When I first seen it I was going to keep it because I felt like it was a sign from him, McCue stated. "I ate it but cos he told me to. It was like a Biblical sacrifice." Her three-month-old son did not seem to be interested in the phenomenon when his mother showed him this miracle. Apparently, after eating the holy scone, McCue said she was humming "Away in A Manger." "See I'm not one for starting rumors but I’ve also started humming Away in A Manger, but that could be just coincidence," she said.

Amy Cathrine McCue says she spotted Jesus' face on her tattie scone. But is it more like Billy Connolly? https://t.co/ivoyYYBp7w

Disclaimer : The views expressed in this article belong to the writer and are not necessarily shared by shared.com