Angry Wife Writes Savage Letter To Her Cheating Husband's Mistress: "He's All Yours"

She did say many not-so-nice things to her, but she is certainly the queen of sarcasm here. 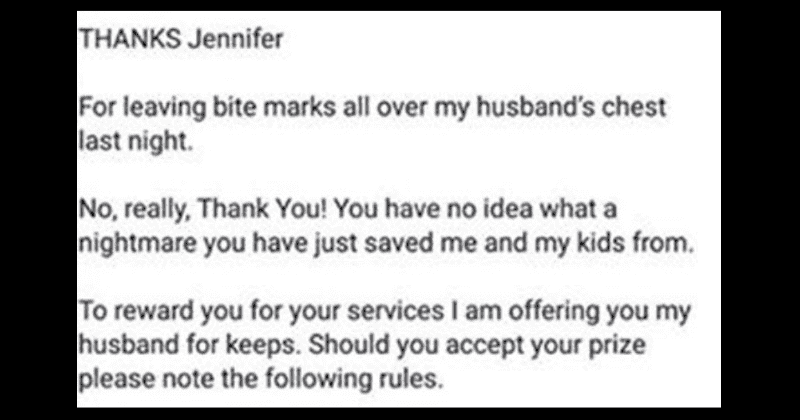 It takes a good deal of sarcasm and a refined sense of humor to turn an unpleasant situation into a hilarious one. Consider a rather awkward situation where your partner catches you cheating on them. Just what do you imagine they would do? Well, obviously they would ask you to leave or create a scene. Yes, these are fair assumptions, and they would probably divorce you and want to teach the one you cheated on with a lesson or two. Sometimes, people even resort to publicly humiliating their (ex) partner and their newfound lover.

In one peculiar incident, a woman decided that none of these ways was gonna cut it. So she instead did something that surprised us all, much like it did to her partner. So, on discovering that her husband had a mistress, she found out who the woman was and wrote an open letter to her, GoSocial reported. The letter, oh where do we begin, the letter, is just so brutal yet hilarious at the same time you'd think you were dealing with the queen of sarcasm herself.

She starts off by revealing how exactly she found outa bout the affair between her husband and the person called Jennifer.

Then she gets right down to business and hits them straight up. She let her husband mistress know that it's too bad that he's not going to have enough money to lavishly spend as she probably expected him to.

After that, she starting talking about clothes and letting the mistress know that she's going to have to buy him some new ones now that she might be deciding to burn them.

Oh... that was a literal burn. Then she lets the mistress know that much to her preconceived notions, he's not going to give her all the time in the world as he has two kids and would need to spend time with them.

Jumping right into the sex life, the angry yet sarcastic wife leaves no quarter and dishes out the pain in full force.

Then she starts getting serious and made it clear that both her husband and the mistress screwed things right for themselves.

This woman sure knows how to make a point, and it's fated that her husband is at the sticky end of it. She lets the mistress know that he will blame all of it on her.

Wrapping up her lengthy message she even throws in some friendly advice for her future troubles.

With that, she finally bids adieu and secretly wishes them peace and happiness (or not)

All we are missing at the end of this is a mic-drop. Justified or not, this sarcasm is to be saluted.