trending celebrity people lifestyle news animals
Woman, Who Has Had 11 Kids In 13 Years, Wants To Keep Going Till She Has 14

"I am the only mum at our church who has lots of kids. I think the most anyone else has is four," she said. 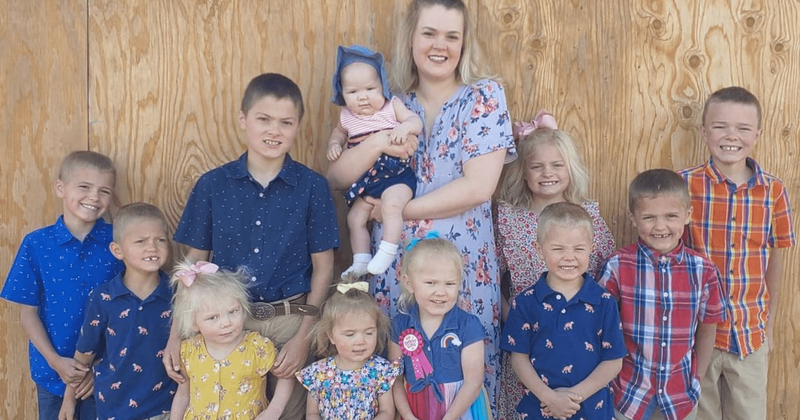 Courtney Rogers, 36, from Santa Fe County, New Mexico, had an unusual ambition when she married church pastor Chris, 32, in October 2008 -- she wanted to have at least 14 children. Over 13 years on, and 11 kids later, Rogers still hasn't strayed from her goal and is eagerly waiting to have three more kids in the coming years. In November last year, Rogers and her husband welcomed their 11th child. They now have six boys and five girls, all having names starting from C, with the oldest aged 11 and the youngest at just six months, the Daily Mail reports. Rogers, who is the eldest of six siblings, first met Chris, the eldest of ten children, through mutual friends at a church camp in Georgia in 2007. And over a year later, they were married.

The longest she has spent without being pregnant since her marriage is nine months. According to The Sun, the couple spent around $1,200 a month on food for the entire brigade, home-school them, and drive a 15-seater van. Despite racking up more kids than many would even consider, the couple isn't close to being done. "We want to have more if we can," she said. "We want to have 12 children, a family of 14 even." Since January, the family has been forced to cut their costs and they have since stopped eating and going out. To save money on shopping, the children wear hand-me-down clothes and shoes while Rogers finds things on sale to save enough money. Both Rogers and her husband homeschool the children on their 12-acre land, which includes a farm.

Naturally, having so many children in quick succession drew the attention of a lot of people who went on to criticize Rogers but she is unfazed. "The people who ask how I can give all my kids enough attention are usually those who send their kids off to school," she shared. "I do not understand their logic when I am around my kids 24 hours a day." Talking about homeschooling her children, Rogers added that they adapt easily to the lessons since she doesn't force them to be rooted to their desks for hours at a time. It gives them the flexibility to go around and feed the farm animals in between their lessons, she said. When asked if she isn't tired of becoming pregnant so many times, Rogers brushed off the claim to share that she "loves" it.

"I love growing another person inside me, thinking about what they will be like and picking out names," she said, according to The Metro. "I am the only mum at our church who has lots of kids. I think the most anyone else has is four." She is opposed to birth control as it makes her uncomfortable. She also refuses to slow down on her pregnancies. "I’ve been told there is a higher risk of hemorrhaging if you have lots of babies, but I don’t worry about it, as I try and give birth in hospital and they’re prepared," she said in response, adding that she is only concerned with having a big family. "I had my first baby when I was 25. I didn’t think they would all come so fast, but, of course, I wouldn’t change that."

Although having such a large family makes her happy, she claims caring for 11 children is certainly "challenging". "It stopped me from doing anything alone," she said. "It’s easier now they are all older."