In a Reddit post, she wrote that she tried convincing him to inculcate some basic hygiene but he refused. 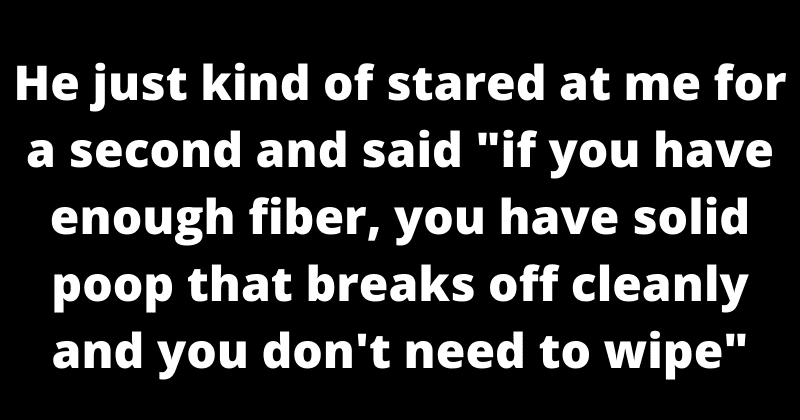 It's all fun and games on Reddit until one realizes their partner and the person being written about in an angry post on the internet are the same types of people. That's just how one Redditor found out her boyfriend never wiped himself after a dump. It all started when the woman shared a post from Reddit with her boyfriend. "Sooooo I lurk on Reddit a lot and my boyfriend doesn't, so I sometimes tell him about entertaining/interesting posts I see on here. Usually, it's just memes or funny stuff, but sometimes it's threads on here that are about really wild relationship drama," she wrote in her own post. Little did she realize that the drama was going to unfold in her life.

She wrote further, The other day I read out loud a thread about someone whose boyfriend didn't wipe his ass after pooping and would get streak stains on his underwear. I expected him to laugh but he just kind of stared at me for a second and said "well it's because he doesn't get enough fiber." The woman did not expect the reaction from her boyfriend. Obviously worried about what is coming her way, she asked him to elaborate. In reply, he told her, "If you have enough fiber, you have solid poop that breaks off cleanly and you don't need to wipe." The woman said she was "stunned." She even thought it was a joke since he would sometimes play pranks on her. However, this was not the case as he "was dead serious." She wrote, "I asked him if he doesn't wipe and he said he has good nutrition so there's no need."

She tried to appeal to his better sense and insisted that "there's always going to be some residue and you need to use toilet paper after pooping." Rather than see reason, he "just got mad" and told her that she needed to take fiber supplements since "obviously I must have loose stools." The girl saw no point in arguing and dropped the issue until one day her partner went to the grocery store and did the unthinkable. "I was just going to drop it, but he went grocery shopping the other day and BROUGHT HOME SOME FIBER SUPPLEMENTS FOR ME. He laughed and said that I should be glad he chips into the cost of toilet paper, since I'm the only one who needs it. I got frustrated and said he was being a dick, but he said he was joking (about the toilet paper, not the supplements) and that I was being too sensitive," she wrote.

The woman finally told her man that she was "really grossed out by him" and  since the revelation, she "felt unattracted to him."  Even then, to collective bafflement, the woman managed to have sex with the man twice. However, she said she wasn't into it and was not turned on at all. "I want to tell him this but I know he'll just get mad again and make fun of me," she wrote, claiming she was in a dilemma. "Should I just drop the subject or insist he start wiping? I don't want our sex life to suffer and I'm tired of him talking about f**king fiber, but now I'm wondering if I *am* just acting crazy," she concluded. Many replies to her post called her boyfriend "disgusting" and "gross" with some even asking the woman to leave him for his poor hygiene.

Some others pointed out that his lack of hygiene would mean that there was a chance that the woman would be infected with diseases. They asked her to tell her partner that there would be no sex if he did not change his ways.