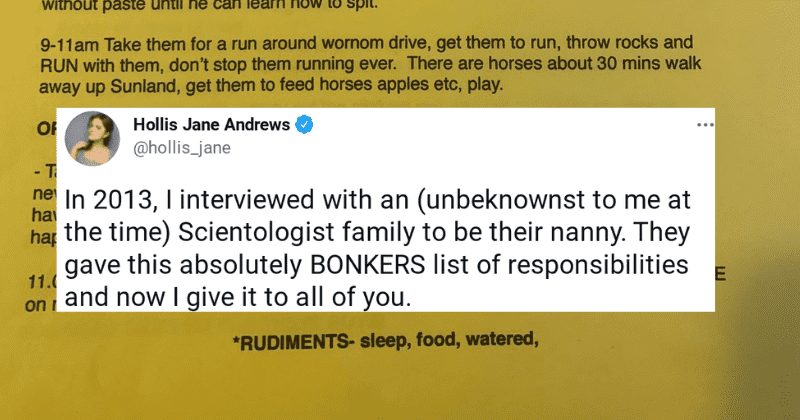 The job of a nanny is demanding whether it is taking care of one child or two. And sometimes you're saddled with overbearing parents making your job that much harder. But all of that may seem tame compared to the demands one particular family had when they were looking to hire a nanny for their sons. Their demands were so outrageous that it actually ran for two pages and were almost too strange to be real.

Actress Hollis Jane Andrews shared photos of the job description on Twitter. In the tweet, she wrote: In 2013, I interviewed with an (unbeknownst to me at the time) Scientologist family to be their nanny. They gave this absolutely BONKERS list of responsibilities and now I give it to all of you. The list had the title, "Hat Write-up" followed by "Magical Nanny/Housekeeper Hat." If that sounds like they were on the lookout for a nanny by the likes of Mary Poppins or Nanny McPhee, the list of demands would discourage even the original nannies with magical powers from considering taking the job.

In 2013, I interviewed with an (unbeknownst to me at the time) Scientologist family to be their nanny. They gave this absolutely BONKERS list of responsibilities and now I give it to all of you. pic.twitter.com/le0rhiBrcg

The two children's schedule was laid out in great detail from 7:30 in the morning right up to their nap time at noon. The purpose of the nanny was "to keep boys well fed/well slept and house in order to provide sanity for parents." The children's "rudiments" which comprised "sleep, food and watered" had to be kept up. It then detailed how, “if the boys are at all noisy, take them OUT of the house. If they hurt themselves, keep quiet, apply Dianetics and assist tech always."

If you're wondering what this is, well, Dianetics is a principle of Scientology. In his book, L. Ron Hubbard explains, "the reactive mind in detail and laid out a simple, practical, easily taught technology to overcome it and reach the state of Clear. Dianetics is that technology."

"Keep their rudiments in"

Scientology-speak refers to things being "in" as if people are computers with programs being shoved into them. Of all the evils, I hate co-opting and then screwing up the English language with impunity so much 🤣 You cannot "put rudiments into people."

After a breakfast of eggs and turkey bacon, the nanny would have to take them out to play where they would get to "throw rocks and RUN." The ad stressed, "Don’t stop them running ever." Alternatively, they could be taken to the park where the nanny would be expected to act like a child with them. She was told to keep them laughing because according to the ad, "If they are not laughing, they are not happy." They were then allowed a meal followed by a dip in the pool, a bath, and it was time for lunch. For lunch, the children were given meatballs or steak with ketchup. Before nap time they would also have to be given protein drinks.

Once the kids were put to sleep, the nanny was expected to "magically transform into a cleaning nazi" and clean the entire house in 45 minutes. It ended with: "NO PHONES OF YOUR OWN AT ALL DURING WORK HOURS. YOU NEED TO BE FIT FOR THESE BOYS." Andrews then tweeted, In case it wasn’t clear, I did NOT take the job the minute I saw the word “dianetics.”

The tweet went viral and was retweeted over 3.2k times and liked over 27k times. People on Twitter could not get enough of the ludicrous list. One user wrote, There's a lot here but magically transforming into a cleaning Nazi really took the cake. I want to talk to whoever actually took this job and how long they lasted lol.

The shiny, shiny kitchen really got me!

Twitter user jax wrote, the NO MOVIES!!!! meanwhile, I leave my babysitters being like 'thank you, you are an angel sent to us from heaven, take anything from our home as you see fit, just keep them alive. if they are asleep when we get home even better. please please please come again.'

Andrews also added that she saw the ad eight years ago and it offered a payment of $13 per hour at the time.

How old were these precious bundles of laughter and protein? I hope you ran from this job, throwing rocks as you disappeared over the horizon.

So many things already mentioned, but also when does the Nanny get dry off from swimming and what awful thing is the stinky poo poo bin?