"There were no longer arbitrary rules I had to follow, and it gave me the freedom to make accomplishments again," the woman said. 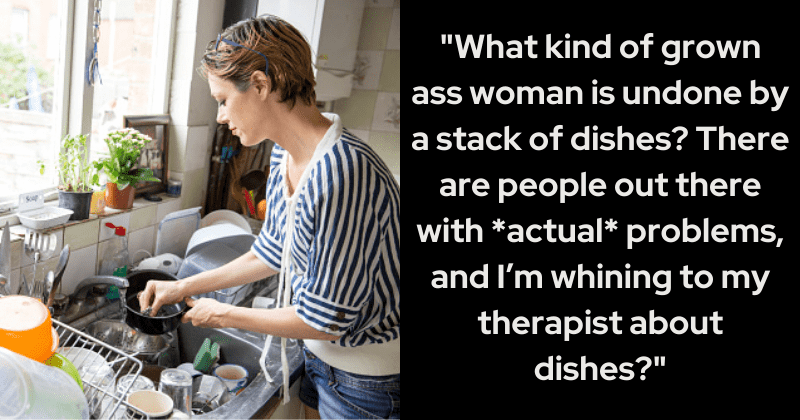 Those with depression would know the difficulty of doing even the most mundane tasks. Taking a shower, doing the dishes and laundry, or just getting out of bed just seems like a Herculean effort. But sometimes, paying heed to out-of-the-box advice could actually get you started. "Run the dishwasher twice" may not seem like much advice. In fact, it does not even seem like one at all. But read on and you will understand. Danielle Wunker, a Licensed Professional Counselor and Supervisor, shared a story about one therapist giving this advice to his client and how it changed the person's outlook on life. It was something that resonated with a lot of people. The post was originally taken from a Quora post.

Answer to Has a therapist ever told you something completely unexpected? by Kate Scott https://t.co/ucna2Oj8PI Short but a great read. #quora

It began: "When I was at one of my lowest (mental) points in life, I couldn’t get out of bed some days. I had no energy or motivation and was barely getting by. I had therapy once per week, and on this particular week I didn’t have much to ‘bring’ to the session. He asked how my week was and I really had nothing to say. “What are you struggling with?” he asked. I gestured around me and said “I dunno man. Life.” The therapist was not satisfied with the answer and persisted in asking the woman, “No, what exactly are you worried about right now? What feels overwhelming? When you go home after this session, what issue will be staring at you?” The woman thought for a while and knew the answer but was too embarrassed to even spell it out since it did not seem like it could be part of the conversation.

Interesting, something similar was said in the tv series Fargo..https://t.co/vFfZG5Eydx

"I knew the answer, but it was so ridiculous that I didn’t want to say it," the post read. The woman wanted to tell the therapist something "more substantial" and "profound" but there was nothing of that sort in her mind. "So I told him, “Honestly? The dishes. It’s stupid, I know, but the more I look at them the more I CAN’T do them because I’ll have to scrub them before I put them in the dishwasher, because the dishwasher sucks, and I just can’t stand and scrub the dishes. I felt like an idiot even saying it. What kind of grown ass woman is undone by a stack of dishes? There are people out there with *actual* problems, and I’m whining to my therapist about dishes?" The therapist did not judge the woman but just nodded and said, “Run the dishwasher twice.” The woman failed to understand what he meant at first.

"I began to tell him that you’re not supposed to, but he stopped me," she said according to the post. The doctor however asked her why not? It's not that there are rules for dishwashing. "Why the hell aren’t you supposed to? If you don’t want to scrub the dishes and your dishwasher sucks, run it twice. Run it three times, who cares?! Rules do not exist,” according to the post. Just then, the woman got what her therapist was trying to tell her. "It blew my mind in a way that I don’t think I can properly express," the post stated further. And she began applying this advice the day itself and it did wonders for her: "I went home and tossed my smelly dishes haphazardly into the dishwasher and ran it three times. I felt like I had conquered a dragon."

She did not stop there and continued applying it to other tasks: "The next day, I took a shower lying down. A few days later. I folded my laundry and put them wherever the f*ck they fit. There were no longer arbitrary rules I had to follow, and it gave me the freedom to make accomplishments again." The woman understood the full meaning of the message. It gave her the confidence to begin, and although temporary that was all she needed to begin moving forward and to a "healthier place." The post concluded: "But at a time when living was a struggle instead of a blessing, I learned an incredibly important lesson: There are no rules. Run the dishwasher twice."