trending celebrity people lifestyle news animals
Woman With Down Syndrome Points Out How System Is Unfair To Them, And It's An Eye Opener

Woman With Down Syndrome Points Out How System Is Unfair To Them, And It's An Eye Opener

Archaic laws combined with loopholes work against those with Down syndrome, making their lives difficult. 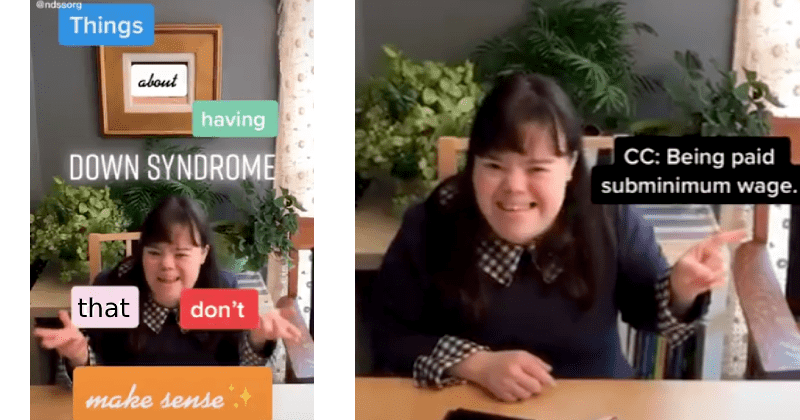 Content warning: This story contains themes of ableism and police brutality that readers may find disturbing

A woman with Down syndrome helped elaborate some of the prevalent problems that make life difficult for those with Down syndrome. The video posted by the National Down Syndrome Society (NDSS) on its TikTok channel has raised awareness on the issue, calling for the changes in the system that could help make the lives of those with Down Syndrome a lot easier. The TikTok video was an eye-opener to the problems those with Down syndrome faced. It highlighted the poor rationality of some of the existing laws and showed why the system wasn't accommodating of those with Down syndrome. It is a genetic disorder that occurs when a person has a full or partial extra copy of chromosome 21, which changes their development both physically and mentally. Among the things highlighted were sub-minimum wage for the differently-abled, being denied an organ transplant, not being able to get married for the fear of losing support benefits, and a police force not trained to deal with differently-abled individuals.

this is super informative pic.twitter.com/4kFVxLKpmK

Sub-minimum wage
Yes, it is as bad as it sounds. In a country where the minimum wage in itself is lower than it should be, a sub-minimum wage is nothing but a tool to further exploit employees. As per the federal law, companies are allowed to pay differently-abled workers as low as $1 an hour, reported Vox. The rule was originally designed to serve as a stepping stone for disabled war veterans to get new jobs. They would be paid 'sub-minimum' ages to learn the trade before progressing to be paid full time after training. The law eventually served as a platform for the exploitation of differently-abled. In 2018, Rock River Valley Self Help Enterprises, an Illinois nonprofit, that pitched itself as a vocational training program for people with disabilities but was found to be a subcontractor for local factories. The Department of Labor took action against the company “after finding nearly 250 workers with disabilities were being exploited.”

Get married at the cost of support benefits
When the law as formulated, the rationale behind it was that the spouse would be able to support their partner with Down syndrome. However, this is isn't always the case, which makes them effectively lose their much-needed support. Those with Down syndrome are discouraged from getting married for the fear of losing support benefits.

Police not trained to deal with the differently-abled
The law enforcement agencies are rarely given any training on how to handle differently-abled people, especially in situations of duress. The NDSS' TikTok video pointed to Ethan Saylor's death as an example of authorities failing those with Down Syndrome. Ethan Saylor, a 26-year-old man with Down syndrome, died after three off-duty sheriff deputies got physical with him at a theatre because Ethan didn't have a ticket. Ethan’s aide Mary realized Ethan, without purchasing a ticket, had gone back into the screening hall of the movie they had just watched. She contacted the theatre manager and explained the situation and urged authorities to allow her to enter the theatre and escort him out calmly. The manager, despite being informed Ethan had Down Syndrome, chose to alert security about the situation, who were in no way trained to handle the situation.

Three off-duty sheriff deputies, who were filling in as security personnel, approached Ethan inside the movie and asked him to either leave or purchase a ticket failing which he would be forcibly dragged out. “He didn’t cooperate, of course. He didn’t want to leave. At that point, I believe, he wouldn’t know what was going on,” recalled a tearful Patty Saylor, his mother. Ethan’s parents insist, in a lawsuit filed by them that his physical and facial features and body language could easily have been attributed to individuals who suffer from Down Syndrome, reported NPR. The TikTok video turned out to be an eye-opener for many and helped raise awareness on the various laws that need urgent attention.

We have a family friend with Downs, and she is one of the most beautiful people I know. She is always a point of light; hence why this video has me in tears. Her mom doesn’t talk about this part of her life.

Why does america treat people like this? Bc it’s not like this in the rest of the world...

thankyou for sharing this!!! my brother has down syndrome and it’s one of the disabilities that is never shown or talked about so i’m really happy people are seeing this

what's more disgusting is most companies get paid extra from the government for hiring disabled people.