Their white appearance as a result of leucism makes it easier for poachers to spot them. 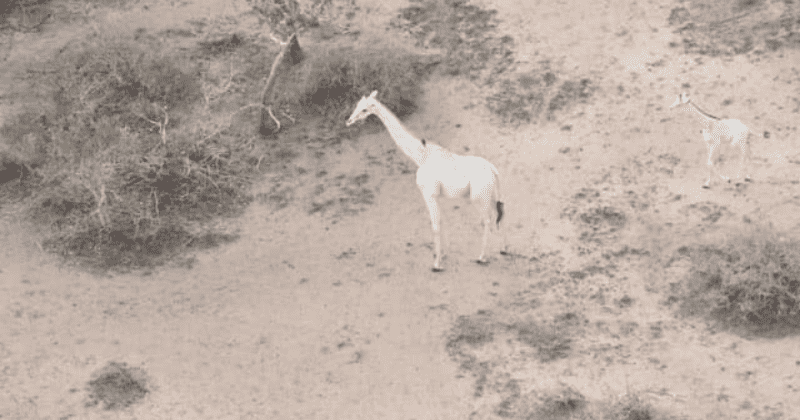 The world's last known white giraffe has been fitted with a GPS tracking device to help protect it from poachers in Kenya. Kenya's only female white giraffe and her calf were killed by poachers back in March, the Ishaqbini Hirola Community Conservancy said in a statement. Now the white male is all on his own but his movements will be tracked in a bid to protect him. Rangers may be able to monitor the lone male giraffe's movements in real-time. The conservancy which oversees wildlife in the area said the tracking device was attached to one of the giraffe's horns on November 8.

A rare genetic condition called leucism is what gives the animal its unique white color. The group described the condition as "a partial loss of pigmentation resulting in white, pale or patchy coloration of skin, hair, feathers, cuticles or scales but not eyes. Unlike albinism, it is caused by a reduction in multiple types of pigment, not just melanin. A giraffe with leucism was spotted in January in Tanzania and it would seem that this is the condition seen in the Ishaqbini giraffe. Albinism, on the other hand, is a congenital disorder characterized by the complete or partial absence of pigment in the skin, hair, and eyes due to the absence or defect of tyrosinase, a copper-containing enzyme involved in the production of melanin. It is the opposite of melanism."

According to the BBC, the lone white male giraffe is believed to be the last of his kind. His family members were killed last March: a female and her seven-month-old calf with similar white skin. The male is currently living alone in the area where their bodies were found, in a conservation area in Kenya's north-eastern Garissa County. In a statement, the non-profit group said the tracking device would give hourly updates on the giraffe's location, allowing rangers to "keep the unique animal safe from poachers". The manager of the group, Mohammed Ahmednoor, expressed his gratitude towards conservationists for their help in protecting the giraffe and other wildlife. "The giraffe's grazing range has been blessed with good rains in the recent past and the abundant vegetation bodes well for the future of the white male," he said. The Kenya Wildlife Society, the main conservation body in the east-African country, said it was happy to assist in efforts to protect "unique wildlife like the only known white giraffe".

There were 3 known white giraffes in the world, and now this guy is the only one. He’ll wear a GPS collar so wildlife rangers will always know where he is https://t.co/cGAaTV42bz via @MailOnline

According to Daily Mail, Ahmednoor also said, "Its killing is a blow to tremendous steps taken by the community to conserve rare and unique species and a wakeup call for continued support to conservation efforts. This is a long-term loss given that genetics studies and research which were significant investment into the area by researchers has now gone to the drain. Further to this, the white giraffe was a big boost to tourism in the area."

In 2016, an earlier white giraffe sighting had been reported in Tanzania's Tarangire National Park. Not much is known about what happened to that animal. As for the white female that was killed, she was first seen in 2017. She later gave birth to two calves, the latest in August last year. Workers at the Hirola Conservation Programme talked about how local community rangers let them know of the special sighting. "They were so close and extremely calm and seemed not disturbed by our presence," the conservation workers said in 2017. "The mother kept pacing back and forth a few yards in front of us while signaling the baby giraffe to hide behind the bushes." The mother's behavior was a "characteristic of most wildlife mothers in the wild to prevent the predation of their young." Sadly, the bodies of Kenya's only female white giraffe and her calf were found 'in a skeletal state after being killed by armed poachers in Garissa in eastern Kenya in March," the Ishaqbini Hirola Community Conservancy said in a statement. Hopefully, the tracker and efforts of conservationists would be enough to help protect the world's only known white giraffe.