Edible Glitter Turkey Exists, And You Can Dazzle Your Guests For Thanksgiving 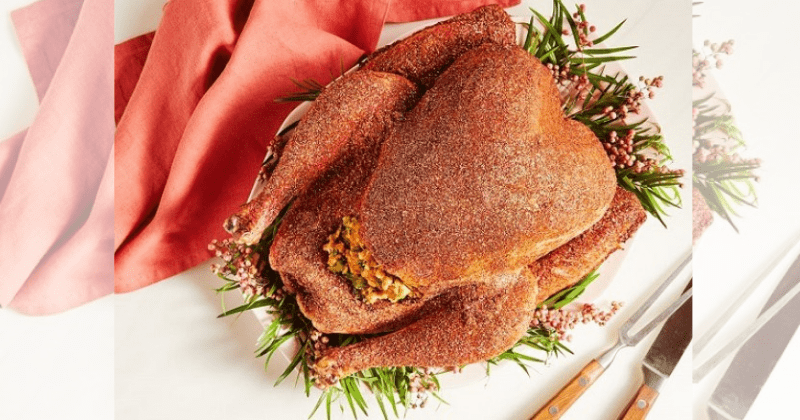 Most of us wouldn't look at a Thanksgiving dinner spread and think: "Huh, the food sure is missing a sparkle!" But that hasn't stopped this company from introducing the Edible Glitter Turkey. If you thought "who needs their food covered in glitter," you'll most likely change your mind because this looks delish! Reynolds Wraps debuted its glittery recipe in time for the holidays in 2018 reports Daily Mail. Reynolds Kitchen, the company behind Reynolds Wrap aluminum foil, are well-known for their creative recipes with their products. For Thanksgiving, they created a roasted turkey covered in edible pink glitter. "Make your Thanksgiving turkey the coolest on Instagram with these fun hacks and creative turkey recipes," the brand wrote.

To start off, the glitter turkey is made just like any other turkey. It is roasted in the oven for several hours, and the only exception that differentiates it from the rest is the addition of a sprinkle of edible glitter powder on top just before you put it in the oven. You don't have to worry about safety concerns, as the glitter is made from Gum-Tex powder, water, and food coloring. In case you're feeling a bit lost, the brand has included step-by-step instructions of how to go about it and added that the glitter can be any color you want even though they went with the pink version for demonstration. The end result as you may have guessed is a sumptuous-looking turkey roasted to perfection – with a dash of glamor added in.

That's not all, another recipe of theirs may leave you scratching your forehead but it sure is going to be a treat. Called the Mountain Dew Turkey, this recipe is made by brining the bird in Mountain Dew mixture before cooking. As atrocious as that may sound, give it a try because the turkey will have a delicious citrusy flavor. Their other releases include Big Mac Stuffing, Popeyes Fried Chicken, Biscuits Stuffing, and lest we forget the Crunch Wrap Supreme Stuffing. While the Big Mac one is made by mixing chopped-up cheeseburgers with beef stock and spices, the Crunch Wrap Supreme includes taco pieces, lettuce, sour cream, and tomatoes.

A few years ago, the company had gone viral on social media after introducing the Flamin' Hot Cheetos turkey, which was unconventional, to say the least. Reynolds also shared a similar recipe that requires "ranch-flavored corn chips" such as the Cool Ranch Doritos, and another that uses "onion-flavored rings" like Funyuns for stuffing, all of which sound oh-so-good! However, social media netizens had mixed reactions to this glitter turkey.

Edible Glitter turkey to dazzle your guests!? Who in their right mind thought this was a good experiment?

@ResourcefulMom edible glitter applied to a turkey would sure make a pretty centerpiece and catch an eye or two :) #Perdue

If you can stick to one or many of these ideas for the holidays, we're sure you're going to have a gala time with friends and family. You can even bring back the glitter or Mountain Dew turkey this year, because let's get unconventional, given the year that we've had so far.