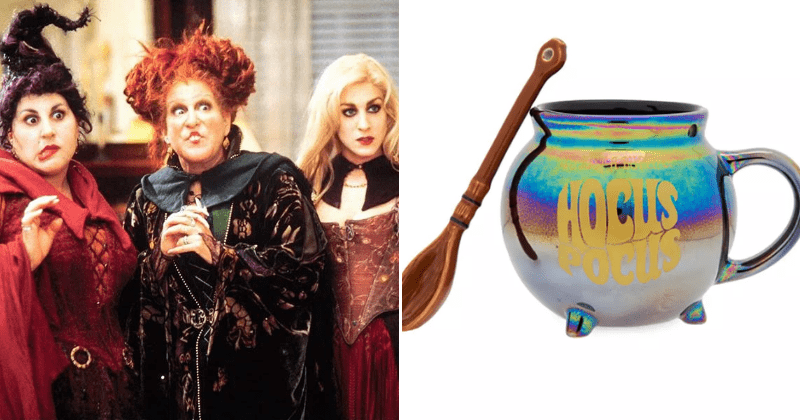 Halloween is quickly approaching and we are all set to get our spook on. And there's nothing that says "it is time for Halloween" than some Hocus Pocus. It's only when we start to see the Sanderson sisters come back from the dead can we truly appreciate the beginning of the holiday season. Lots of Hocus Pocus merch are in the pipeline this season and it is just the beginning. The timeless film will always be close to our hearts and a huge part of being a fan is keeping the spirit of the film alive even after 27 years since it first came out. If that means hoarding merch inspired by the movie, then so be it.

Disney has just announced a new Hocus Pocus mug that is just what you need to celebrate the film. Staying true to the theme of the film, Disney has released a new mug styled after a cauldron, which also happens to be iridescent and looks utterly magical. On top of it already being so awesome, it comes with a wooden spoon to complete the witch starter kit. You can now have the witch brew of your choice whether it is the potion for immortality or black tea, this cauldron mug is here for you.

The official description on the page reads: Stir up trouble with the ceramic spoon styled to look like wood, or just boil and bubble your favorite witches brew in our cauldron-shaped mug celebrating the magic of Disney's 1993 film Hocus Pocus, with an iridescent finish and gold lettering. Additionally, the mug has a high gloss glaze and it looks stunning. The text ''It's just a bunch of hocus pocus'' is printed on both sides of the mug. The wooden spoon looks straight out of the witch's coven from the yesteryears and is a stark contrast next to the colorful cauldron.

The ceramic cup is 4 x 5 1/4 x 2 3/4 inches and can hold 12 oz of liquid. The spoon is six inches long. You can get it on the official Disney shop for $19.99. The cup is perfect for your morning fuel as you stare outside at a dark world, sipping from the colorful mug. Or you know, to hold your beverage when you are relaxing and watching the movie.

The 1993 comedy movie is a story about three witches who are brought back to life after 300 years and now want to avenge their death. The film did not do all that well when it first came out but has now developed a cult following.

Many of us watch the film multiple times a year, especially during the holiday season. However, Bette Midler, who plays Winifred Sanderson, rewatched the film only once or so in over 20 years. In 2018, she told PEOPLE, “I thought it was so funny! The first time I watched it I was only watching myself. But this time I saw everybody. And I tell ya, those girls in the back — they were going full blast! They were giving me a run for my money. The kids were great, everybody was great!” Midler stars in the film alongside Sarah Jessica Parker and Kathy Najimy.

Soon, a sequel of the film will be out - almost three decades after the original. Adam Shankman is set to direct the sequel and the film is in the pre-production stage, according to Variety. Although the actors for the sequel are yet to be confirmed, Disney is hopeful that the original actors will become involved in some capacity. Sources say that the trio of actresses should ideally reprise their roles. This would be much better than having to completely reboot the first film, which may not please many fans.